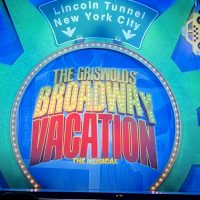 By Douglas Bursch on September 23, 2022 in Culture, Review

The other day while driving with my 20-year-old son, I noticed an electric car I had never seen before. As we drove by the bright light blue sedan, we were unable to identify its make and model until we reached the front and saw its iconic emblem. Both of us responded with similar quizzical expressions: “I guess it’s a Mustang.” What followed was a long conversation about why Ford would make an electric car that didn’t really look like a Mustang but call it a Mustang.

I thought about this conversation while watching The Griswolds’ Broadway Vacation at The 5th Avenue Theatre. As the title suggests, this musical was created to reach Broadway. To reach that destination they started with an attractive premise that has the potential of pulling in audiences based on the premise alone. The National Lampoon’s Vacation films, particularly the movies starring Chevy Chase, have anchored themselves into the cultural consciousness of Americans over 50. Americans over 50 also seem to be the target audience for most new Broadway productions. As it is increasingly difficult to get people to shell out large sums of money for Broadway shows, it helps to start with a musical premise that will connect with even the most theatrically naïve tourist or tourist family. In other words, if possible, a popular Broadway production should have a premise and a title that attracts a family like the Griswolds.

With the “Vacation” movie emblem securely attached to this new musical, I went into the theater hoping for the best but wondering if I would experience a presentation that was more about the packaging than the performance. Thankfully, I had a pleasant night full of laughs, clever surprises, some catchy songs, vibrant performances, and a few surprisingly heartfelt moments. It’s a good show with many strengths and I consider it a privilege to have seen this pre-Broadway production manifestation.

However, my biggest problem with the show is it gave me a similar feeling to when I discovered the new Ford Mustang electric vehicle. Just as the electric car didn’t match the Mustang moniker, the theatrical presentation I experienced last night didn’t quite align with its title. The Griswolds presented in this new musical adaptation are rather different than their movie counterparts. They are kinder, gentler, sweeter, healthier, and more balanced than their movie expressions. Their problems are more normal, their desires are more understandable, and their solutions are more practical than the past movie solutions of kidnapping a boss or security guard to mitigate family disappointments.

While the Vacation movies are primarily a vehicle for Chevy Chase to do Chevy Chase stuff within absurd predicaments, the musical is primarily a vehicle for an excellent cast to present a balanced and humorous representation of an American family archetype trying to process slightly exaggerated vacation and family predicaments. The show certainly has some extreme and ridiculous moments, but the humor and conflict are frequently anchored in material that is less National Lampoon and more Prairie Home Companion. Actually, Prairie Home Companion is not the best description. The show has its own voice and that voice is enjoyable to hear, even if it doesn’t align well with its movie origins.

The creative team has put together an engaging comedy that really takes off in the second act. Instead of growing tiresome or boringly derivative, David Rossmer and Steve Rosen (Book, Music and Lyrics) create a show that takes time laying the groundwork for comedic and heartfelt relational payoffs. They also leave some of their best songs for the last hour, including giving brief but ridiculous humorous homage to Lin-Manuel Miranda’s Hamilton musical stylings. My favorite song was the father/daughter duet “You Can Tell Me Anything (But You Don’t Have to Tell Me Everything).” It is the perfect mix of beautiful music, beautiful voices and really strong story telling through song.

Donna Feore (Director and Choreography) does excellent work bringing out both the humor and heartfelt expressions of the show. I also appreciated the synchronized Elmo/Cookie Monster knock-off costumed Times Square dance and the Naked Commando bicep choreography. Her swearing choreographed gags were also one of the highlights of the night. The large supporting cast was energetic and engaging.

I enjoyed the reimagining of Cousin Eddie (Jay Klaitz) and think the production would do well to have a couple more minutes of him in the first act to build up anticipation of his scene stealing presence in the final act of the show. Alan H. Green’s Naked Commando has the best number in the first act and the strongest voice in the cast. Hunter Foster (Clark Griswold) and Megan Reinking (Ellen Griswold) work well as leads who spend a large amount of time apart from each other during the show. When they finally share the stage and share songs, they have a lovely chemistry. Livvy Marcus (Audrey Griswold) shines representing the average American daughter trying to determine her next big step from high school to college. She also has an engaging voice that I would enjoy hearing more in future productions. Nathan Levy (Rusty Griswold) has probably the most absurd story line that fills the show with great humorous surprises. He does well as his character seems to navigate a different musical than the rest of the family.

I don’t know if The Griswolds’ Broadway Vacation will make it on Broadway and if it does make it on Broadway, it won’t be because it’s a carbon copy musical version of its movie source material. Instead, the show will make it because of its humor, its heart, and its relatability. Or it might just make it because it has a recognizable moniker to get people to purchase tickets.