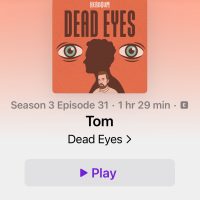 By Douglas Bursch on March 23, 2022 in Entertainment, Podcast

When successful people give advice on how to live with failure, their message has already been compromised. Success disqualifies successful people from truly identifying with the perpetually, persistently unsuccessful masses. The rich man might have once been poor and the famous woman might have once been unknown, but their seasons of anonymity and languishing prospects were temporary. Their failures were the precursors to their successes. Their perseverance through trials, hardships, and disappointments led to their ultimate triumphs. Although a successful person’s story might motivate the unsuccessful to press on, the chasm between those who have won and those who have not yet won or never will win grows greater with age and the awareness of how success is often the anomaly, instead of the norm.

Even so, entertainment is full of success stories and every time award season circles back around on the calendar, we are inundated with tearful speeches from grateful winners cataloguing the failures they were forced to endure to reach their current moment of success. Some hear these speeches and gain courage to press on. Others are simply reminded that success in any field is frequently the exception to the rule.

Connor Ratliff’s delightfully unique Dead Eyes podcast delves into the deep waters of failure and success; rejection and acceptance; ambition and contentment; and being Connor Ratliff versus being Tom Hanks. Dead Eyes has an wonderfully odd and catchy stated premise. The podcast proports to be actor/comedian Ratliff’s attempt to solve the mystery of “why Tom Hanks fired him from a small role in the 2001 HBO mini-series, Band of Brothers.” This premise is somewhat of a ruse or at least not the full story.

In almost true-crime murder podcast fashion, the show digs deeper, wider, and weirder into pursuing why Ratliff was fired by Tom Hanks just days before Hanks was to direct Ratliff in a small scene in the 5th episode of Band of Brothers. This investigation is not just one stand-alone episode, but the main focus of the podcast over three seasons and 31 episodes. Each episode tries to find connections and intersections between Ratliff’s life and Hank’s life through examining the similarities and differences in their journeys. Along the way, Ratliff makes philosophical, practical, and comical observations about life, creativity, and failure.

I will avoid trying to articulate why the events and people Ratliff picks for each episode have value in helping us understand why Tom Hanks fired Ratliff. Ratliff has a conception of interconnectivity that is akin to six to eight degrees of separation. If the podcast continues there is a good chance you will be included in at least one of the episodes. One can only imagine how long the series would last if Ratliff had been fired by Kevin Bacon.

Nonetheless, Ratliff’s connection logic is not that important in the overall value of the podcast because Tom Hanks’ rejection of Ratliff isn’t the true mystery the podcast is trying to solve. Instead, the show repeatedly comes back to the mystery of how people deal with failure while trying to be successful. At some level, Ratliff talks about failure and success with every person he interviews. He frequently delves into how failure or rejection has impacted the life of a person, and how life could have been radically different if just one event had changed. Just as his life was radically altered through being fired by America’s favorite nice guy, every person’s life has been formed by rejection. Each of us have moments we ponder where our decisions or the decisions of others drastically influenced the course of our existence. Ratliff gives us space to ponder those events in a non-judgmental environment.

Although Ratliff tries to create a narrative that puts his Tom Hanks rejection into a larger, healthier understanding of his life, he still lets us in on the insecurities and inconsistencies that plague each of us when trying to make peace with our histories. Ratliff speaks of the good that came from his rejection, but he also speaks of the lingering doubts of what could have been if Hanks had not fired him. His purpose is not to blame Hanks or to find an answer for his success or lack of success in life, but rather to process how our successes are often dependent upon events and people outside our control. Within this context of uncertainty and seemingly random good or bad luck, how do we live meaningful, contented lives? Or maybe, how do we process the fact that some events in life will lead us to be somewhat discontented?

The show evokes so many questions and thoughts concerning success and failure that it may serve as a form of therapy for those who need somewhere to process their rejections. I assume anyone aspiring to make it in the entertainment industry would find the podcast extremely helpful. I also assume anyone living on planet earth will identify with the podcast’s universal themes, even if they’ve never been fired by Tom Hanks for having “dead eyes.”

The culmination of Ratliff’s podcast comes at the end of the latest season of Dead Eyes. After much hoping, longing, and expectation, Tom Hanks finally appears as a guest on the show. Once and for all, Ratliff can ask Hanks to set the record straight. Since this episode was recently released, I will avoid giving any spoilers. In relation to Hanks providing the answers, I can only say that his responses are appropriately satisfying and incomplete. As Ratliff repeatedly warned throughout the series, there was a good chance Ratliff’s firing would not impact Hank’s life and memory in the same manner it impacted Ratliff’s life and memory.

The conversation between Hanks and Ratliff is both satisfying and unsatisfactory, in that Hanks cannot provide answers that are deep enough to truly address the existential struggles addressed by the podcast. Ratliff seems to be aware of this truth and allows the interaction to flow at a level appropriate to Hanks’ interests. Ratliff realizes that Hanks is not present to provide ultimate closure or even profound answers. Instead, Tom Hanks, like all the guests before, shares his stories of success and failure and Ratliff does his best to apportion those stories into the narrative of his own journey.

As Hanks talked about his successes and failures, I realized that regardless of the sincerity of his convictions, I really cannot identify with Tom Hanks’ life. Hanks is not a failure. Although he has experienced failures, he is still one of the most successful actors and persons on this planet, at least in terms of awards, recognitions, and financial renumeration. Hanks is the exception to the rule. I will almost assuredly never experience his journey. I don’t believe his life is easier or that I have a right to judge his existence. I simply don’t believe we will ever have that much in common when it comes to understanding failure. For Hanks, failure will always be understood within the context of his immense successes.

Connor Ratliff is certainly not a failure as an entertainer, but he is also not wildly successful. He is an actor and comedian who found a way to make a living in a very difficult business. There is nothing wrong or substandard about his existence. Even so, as I listened to the podcast, I could identify with Ratliff’s journey. Like many actors, he has come to peace with the limits of his career. At one level, he certainly aspires to great things. On another level, he tries to value what he has, as he understands the very fickle, arbitrary nature of the career he has chosen.

Ratliff, like most Americans, is trying to manage expectations while pursuing the passions of his heart. That journey has been a challenge, as he has faced some rather life altering rejections. Ratliff seems like a man somewhere in the middle, between success and failure. He still has unfulfilled goals and aspirations, but he is trying to be content with the reality of his life, to live accepting what is, versus lamenting what never was or will be. His limited success allows the listener to welcome his observations. He talks with us, not down to us.

Sadly, we usually platform extremely successful people to talk about failure. This is probably because no one will buy tickets to listen to a failure talk about failure. Failures don’t sell out their shows. Their shows don’t even make it to the stage. Failures never win the award. They aren’t even nominated. Who are we kidding, they’re not even in the industry anymore. Their life is “Didn’t you used to be an actor?” or “Weren’t you once in a commercial?” or “Why did you decide to become a real estate agent?” Many aspiring entertainers worked hard but just couldn’t make it in the industry. They had big dreams and lots of talent. Even so, fate shut the door on their aspirations.

I don’t believe any person is a failure. Every life has intrinsic value, purpose, and meaning. The teacher, the mechanic, the nurse, the hairdresser, the stay-at-home parent and homemaker all have lives of value. However, the world is full of people who’ve been rejected, who had dreams that never materialized. In the face of these disappointments, they tried their best to move forward in life. Some changed expectations, others changed professions, all tried to find a way to not be defined by their failures or rejections.

Connor Ratliff’s Dead Eyes is a gift to all of us trying to process the inevitable failures and frustrations of life. He reminds us that every life has value and that success is far more than achieving our dreams. Instead, success is more about learning how to live with disappointments and realizing that we should never allow our wellbeing to be held hostage by events and people outside our control. He also reminds us to ask Tom Hanks for a role in his next project if we ever have him as a guest on our podcast. I mean, come on, he’s Tom freaking Hanks.

The Rise and Fall of Douglas Bursch
What Jesus Did