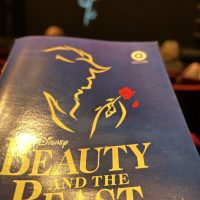 By Douglas Bursch on January 31, 2022 in Art, Review, Uncategorized

Last Friday I had the privilege of seeing Seattle’s 5th Avenue Theatre’s production of Disney’s Beauty and the Beast. Here’s a simple summary: If you liked Disney’s Beauty and the Beast movies, you’ll like the musical. The show contains all the movie song favorites with so many familiar lyrics you might catch yourself accidently singing “there must be more than this provincial life” or “I’m especially good at expectorating” or “tale as old as time” or “kill the beast” or you might just quietly sing alone through the entirety of the production until the person next to you jabs you in the ribs.

However, the musical is not just a carbon copy of the films. There are additional songs and modified scenes that give Beauty and the Beast better theatrical footing. The addition of these newer songs kept the musical from feeling primarily nostalgic. I particularly enjoyed hearing Belle, delightfully embodied by Porscha Shaw, joyously and melodiously belt out the song Home. I was reminded how much I truly love live, musical theater. Just one scene, with a colorful background, warm vibrant lighting, a lovely melody and engaging lyrics, can come alive when an immensely talented actor stands center stage and pours her heart and soul into making that moment come to life. There were many moments when Shaw, as well as the rest of the talented cast, gave us theatrical magic. Maybe I was just hungry for live theater, but I found myself on several occasions just feeling happy and grateful for this team of faithful performers and the talented production crew. I was once again amazed that so many people can gather and pool their collective expertise to put on a show. The sum-total of a good theater experience is always greater than the individual parts. Humanity becomes more when we unite to create something beautiful.

Much praise most assuredly should be given to the director, Jay Woods. Woods’ presentation values the source material, giving keen attention to make sure comedic moments came across both lyrically and physically, allowing for the work to also reflect the artistic strengths of the cast and crew. The Gaston bar number highlighted the strengths of the musical, along with the best of the cast and crew, particularly the choreography of Kathryn Van Meter. The number was visually pleasing, but even in its most grandiose presentation, the lyrics and melody still took center stage. In other words, the visual comedy complimented the comedy already present in the book and lyrics.

Casting can make or break a musical and there are no weak links in the casting of this show. Every song and every singer is worth hearing. Gaston (Jaysen Wright) is wonderfully arrogant with just the right amount of narcissistic charm to convince us that he could sway an entire town to join him in his nefarious behavior. He also has an amazing voice, as does the Beast (Riley Brack). Honestly, if the Beast had really wanted to win over Belle, he should have just sung to her from the very beginning. Sure, he might have horns and claws, but oh that voice; one could forgive a fair amount of uncivility for that voice. The Beast has extra songs in the stage version of Beauty and the Beast that make him seem a bit Phantom of the Opera-ish. However, his sullen songs are necessary to make his brutishness somewhat more understandable. Which brings me to the often-mentioned problem of the basic idea of Beauty and the Beast. Can you truly love anyone who imprisoned your father and then imprisoned you or more appropriately, should you ever truly love anyone whose go-to move is imprisonment?

Before we judge the love affair between the Beast and Belle too harshly, we must remember that Belle grew up in a town where everyone was terrible. I mean, every single person enjoyed singing about how odd and peculiar she was. Even the librarian cast her some shade. Also, every single woman and man in that town loved Gaston. I mean, they loved him in such a way that they were willing to riot for him after hearing just a few lyrics from his charming voice accompanied by his bare chest and perpetually flexing biceps. The only positive figure in her life was her eccentric dad, who seemed to be a bit more concerned with his inventions than with the fact that he lived in a town where everyone collectively, in song, disliked his daughter.

In light of this past, it is no wonder Belle felt some kind of connection with the beast when he remotely showed her kindness. She also received far more kindness from the Beast’s house servants, who were unfortunately swept up into a curse that led to the traumatic existence of becoming clocks, candles and teapots. These miserably cursed (excuse me, enchanted) servants were kinder to Belle than every non-cursed person in her city. Anyway, I think it is understandable that Belle fell for the Beast. He might have looked a bit peculiar, but he at least attempted to value her identity. I’m sure they eventually worked out the whole imprisonment thing with some couple or family therapy.

Anyway, the 5th Avenue Theatre’s production of Beauty and the Beast was enchanting. Such a pleasure to experience live musical theater again. We all showed our vaccine cards and I.D., all wore our masks, and all crossed our fingers hoping for the best. And life and the show must go on.