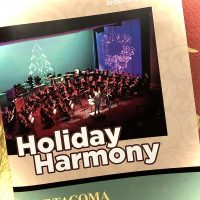 Sometimes I don’t realize how weary worn my soul has become until I’m surprised by beauty. This age of Covid has produced a general malaise. We are trying to survive and thrive the best we know how, but the relentless drumbeat of uncertainty, sickness and sadness has dulled the vibrancy of many daily activities. And although we are somewhat aware of the detrimental impact of living through a long-term pandemic, we don’t fully realize how much this persistent trauma has dimmed our perspective. We still think that we are seeing the world in vibrant color, even though our tired eyes perceive a much more muted picture. Many of us are living faded lives that have forgotten the beauty we once knew.

However, sometimes we stumble upon something so beautiful that our eyes are immediately opened to the joy and glory of life. I experienced such a moment listening to the Tacoma Concert Band’s Holiday Harmony concert at the Pantages Theatre in Tacoma, Washington. I entered the hall with limited expectations and a tired soul. I left rejuvenated by the healing power of music.

The word “essential” has taken preeminence in many Covid discussions. Our world, our nation and our region have argued about what is essential, vital and necessary for people to function, regardless of the circumstances surrounding us. Some work has been deemed essential, while other work has been classified as less necessary for human survival. The arts and artists have found themselves in a precarious position while we have tried to stop the spread of sickness and death. Most artistic expressions were furloughed, cancelled, shut down or delayed to stop the spread of Covid. This left an incredible hole within our collective conscience.

Before the pandemic, my wife and I attended almost every opening night musical production at The 5th Avenue Theatre in Seattle. I had the privilege of writing and posting opening night reviews of their productions. The ability to head into Seattle for a meal and a Broadway caliber show was a consistent highlight of our year. And then, suddenly, that reality shut down, along with almost every opportunity to experience live performance artistic expressions in the Puget Sound region. The shutdown was necessary for our safety, but the impact has been profoundly disheartening. Honestly, I didn’t understand how much I needed art until art was removed from my life. Watching the Tacoma Concert Band’s holiday performance, in a theater, surrounded by vaccinated patrons and performers, reminded me of what I had lost. As the 60 plus performers began to play, I felt the shutters of a dark room within me open and light flooded into my heart.

If you want to hear beautiful, powerful, professional quality wind and percussion ensemble music reverberate through a perfect venue, then you owe it to yourself to attend the Tacoma Concert Band’s next performance at the Pantages Theatre. Conductor and Artistic Director Gerard Morris led his performers and the audience through a night of soul-healing, heart-restoring, life-affirming music. Before each piece, Morris spoke to the audience with the gentleness of a long lost friend delighted to talk with us about what brought him joy during these difficult months. The musical selection ranged in style and tone, with Morris leading us through the night like a seasoned, unhurried tour guide, excited to show us all the sights and sounds. Which was a delight as the audience did not seem to be in much of a hurry either. Instead, we sat in our seats and allowed the music to reverberate through us and to awaken parts of us long dormant. I am convinced that music heals the soul, or at least stirs endorphins that create a genuine sense of well-being.

Although I enjoyed the entire concert, I was particularly enamored with Steve Reisteter’s Hanukkah inspired piece aptly titled The Eighth Candle. I was in the mood for an emotive night and the emotional range of that piece did not disappoint. Shelley Hanson’s Patapan was a crowd pleaser, partially because of percussionist Joel Bozich’s highlighted performance on the bodhran, an Irish frame drum the drummer holds in one hand while his other hand hits the drum with a lathed pieced of wood in a manner that is so rapid, it appears the drummer is trying to shake his hand off from his wrist. When exiting the theater, I heard one concert goer remark to another that he thought the drummer’s hand might have fallen off if the song had continued. On a side note, the drummer is my brother-in-law who invited me to the concert. In his humility, he did not mention to me that he even had a special part in the show. I was impressed, although I did develop sympathetic wrist pain watching.

The highlight of the night for me came in the form of the band’s rendition of Alfred Reed’s Russian Christmas Music. That wonderful hall would have been wasted if the band had not performed such a show-stopping piece that develop slowly from a quiet singular bell chiming to a glorious full band fortississimo climax. The Pantages Theatre is acoustically designed for such a powerful song.

I went into the night politely accepting the invitation to see a local band perform. I went home having experienced an engaging, life-affirming, quality concert. I was truly surprised with how much I needed this evening of art. I think you might need this experience too. If you are not in the Tacoma area, go find a live performance that enlivens your heart. If you are in the area, consider attending the Tacoma Concert Band’s next performance. You won’t be disappointed. You might even come alive.

2 Responses to Awaken Your Soul: A Review of the Tacoma Concert Band’s Holiday Show