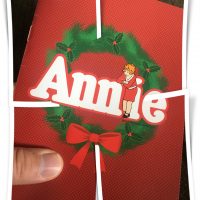 By Douglas Bursch on December 1, 2018 in Review

A musical that repeatedly proports “the sun will come out tomorrow” seems appropriate for audiences used to perpetually cloudy, dark, rain-slogged Pacific Northwest winters. Consequently, Annie finds itself back in Seattle once again championing the infectiously optimistic, dare I say escapist, mantra that “tomorrow there will be sun.” Despite my preconceived cynical disposition, I was thoroughly entertained by The 5thAvenue Theatre’s delightful presentation of the depression-proof, little red headed orphan girl whose voice and cheerful disposition have the power to transform everyone she meets. The show moved at a brisk, whimsical, joyful pace that felt fresh and confident in the strength of the material. This probably says much about my bah humbug persona, but I was pleasantly surprised by how none of the show felt worn or cliché ridden.

The struggle with Annie is she is such a cultural icon, presentations can easily feel satirical if her performance is too shiny and full of over the top gumption. Thankfully, under the apt direction of Billie Wildrick, Annie’s (Visesia Fakatoufifita, also Faith Young in other performances) acting is wonderfully authentic, subtle and heartfelt. We don’t see a stage kid trying to wow a crowd with her big voice. We simply see Annie genuinely wanting to find her parents, needing a home, desiring to belong, singing her heart out to share her love and passion with others. Wildrick brings out wonderful performances in all the orphans (Sarah Bennett, Bea Corley, Carolyn Dunbar, Julia Glynn, Olivia Juarez, Miranda Power, Zoe Papadakis and Maya Russell) and truly demonstrates that kids are at their best when you don’t make them ham it up for the audience. It seems clear that the entire cast and production team believe the story and music are strong enough to avoid unnecessary comedic and dramatic embellishments.

The adult cast matches the kids just fine, with particular note given to Miss Hannigan, played by Cynthia Jones, whose voice is so good you wish she had at least one more musical number to terrorize the kids. Timothy McCuen Piggee does a stellar job of humanizing and broadening the somewhat one-dimensional character of Oliver Warbucks and finds a way to make the audience like someone who pretty much still uses his money to get whatever the hell he wants, from whomever the hell he wants, whenever the hell he wants it. But hey, it is for Annie, so all is forgiven. The whole “government at the service of billionaires” theme is an odd storyline that I had forgotten and which frankly gave the musical a quirky interest I enjoyed. I also enjoyed seeing Tony Lawson portraying Franklin Delano Roosevelt on the stage and wondered if our current president will ever receive similar billing.

Honestly, I thought I might be sitting through a night of over-the-top, cliché-ridden, saccharine sweetness. Instead, I experienced a delightfully directed and well-choreographed (Kelli Foster Warder) presentation of a musical that really holds up with time. I brought my college aged daughter with me and we loved it! Oh, one last thing. There is a dog in the show and I believe the dog is most likely underpaid; a true scene stealer that delighted the audience and gave the night a little suspense concerning the possibilities of live theater. The dog was a professional and refused to go off script. Consequently, everyone had a lovely night. This is where I’m supposed to write something about “bet your bottom dollar” you’ll enjoy this musical…but I’m not going to do that….my cynicism can only take so much. I’ll leave the optimistic singing to Annie.

Abandon the Myth of the Perfect Church
Worthy To Be Rescued