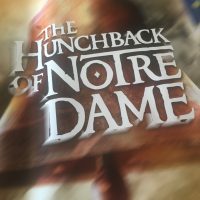 The 5th Avenue Theatre’s presentation of The Hunchback of Notre Dame may have songs and movie title lettering from its Disney film predecessor, but this Seattle production has abandoned any pretense of Disney’s “Happiest Place on Earth” motif to thoroughly ground the musical in the tormented source material of Victor Hugo’s original novel. The themes are deep, dark, bleak and relentless. If you are looking for cartoon comic relief, you’ll need to YouTube a video at intermission. This Hunchback is about the big themes of life: power, discrimination, sex, faith, conformity, class, immigration, misogyny, patriarchy, love and just about every other issue that rises to the surface when individuals and societies try to interact with each other through fear, control and suppression. In other words, The Hunchback of Notre Dame is not a musical comedy.

Sometimes we go to the theater to escape the world, other times we go to bring the world into focus. Last night’s production of The Hunchback of Notre Dame brought many current trending news topics into surprisingly clear focus. For example, Esmeralda’s (Dan’yelle Williamson) predicament of being both accepted and rejected based upon how she responded to the predatory advances of men in power, pretty much embodies many of the themes reverberating through the #metoo movement. The fact that Esmeralda is a “gypsy” and viewed as part of an unwanted, invasive, minority group who is corrupting the morals and culture of the dominant society, clearly adds timely relevance to one of the central conflicts of the musical. Dom Claude Frollo’s (Allen Fitzpatrick) embodiment of the abuse of power through the church, government, parenting, patriarchy and plain old sexual harassment, makes him pretty much the symbolic representation of every current repressive person and institution in society. In Quasimodo (Joshua M. Castille) we find the outcast, formed by an unholy union, rejected by a society that has no place for the uniting of different cultures, worldviews and ethnicities. Quasimodo is hid in the bell tower of Notre Dame to shield the world from his appearance and from the idea that the supposed forever segregated cultures that surround Notre Dame do in fact intersect; love and laugh at night, in secret, outside the watchful eyes of those in power.

The greatest strength of this version of The Hunchback of Notre Dame is in how it integrates Quasimodo’s deafness into the telling of the story. In Victor Hugo’s novel, Quasimodo becomes deaf as a result of spending years hearing the bells of Notre Dame. As a result of Quasimodo’s deafness, he is not only isolated by his deformities and the treatment of his caregiver Frollo, but he is also isolated by his inability to communicate with those who live in the world below him. To represent this isolation and to give Quasimodo a musical voice, he speaks to the gargoyles that surround him in the bell tower. He processes his isolation through the gargoyles and wills the stone statues to speak to him, when no one else will. They hear his voice and even become his voice when the world refuses to give him voice or hear his voice.

To faithfully represent Quasimodo as deaf, but to also represent the power of the song within him, The Hunchback of Notre Dame has masterfully woven together a night filled with song and sign language. I hesitate to mention how this is done, because my description will not do the interwoven expression justice. There is nothing gimmicky or ableist about the representation of Quasimodo’s deafness. Instead, we simply see a powerful representation of what happens when the arts takes seriously a mandate to truly represent a key aspect of an important story. Joshua M. Castille plays Quasimodo with heartbreaking authenticity, sincerity and a relentless commitment to literally contort his body for the two hour production. The 5thAvenue Theatre had better provide free massages for that much relentless hunching over. In partnership with Quasimodo, E.J. Cardona plays a special gargoyle that expresses the voice of Quasimodo whenever he breaks into song. Cardona repeatedly turning to Castille to help Quasimodo tell his story is a powerful representation of the unique collaborative power of the theater and how that power should be expressed in other areas of life.

Dan’yelle Williamson’s portrayal of Esmeralda is dynamic enough, along with all the plotlines heading in her direction, that the musical could easily be titled Esmeralda. Her vocal work is amazing and I wish the sound had been turned up a little to hear a bit more reverberation throughout the hall. Regardless, Williamson’s role took on particular poignancy in our current climate. I especially appreciated that there was no need to ramp up any “gypsy” seductress trope. The story is pretty clear; by simply being herself, she is sexually harassed by a man in power.

Allen Fitzpatrick does a fine job of representing the sexually repressed, worst adoptive parent of the year, Dom Claude Frollo. By the way, I don’t know if this would be a good musical to take your father to for Father’s Day if you have unresolved dad issues, or it might be the perfect musical to take your father to with unresolved dad issues. Just make sure you buy him a mug or something afterwards. Brandon O’Neill’s role as Captain Phoebus de Martin is appropriate in that the musical isn’t really about him and he does a good job giving us the right amount of male bravado while still realizing this is not his musical. As with any 5th Avenue Theatre production, the ensemble work is excellent.

As far as weaknesses, the fundamental weakness of the musical is the tone. The Hunchback of Notre Dame does not have that much variance in music, character or scene expression. For me personally, I felt the songs and the scene design began to feel a bit worn and redundant by the end of the show. I enjoy the possibility of seeing or hearing something new or slightly innovative as a musical progresses. For me, the feeling of Hunchback becomes a bit dark and oppressive as it moves towards the final resolution. This may be intentional, due to the content, but I still look for moments of comedic levity or visual brightness within stories of dramatic despair. The lack of much change and movement in tone made the show and some of the songs feel a bit flat. However, this is a minor complaint considering how much I enjoyed seeing the way The Hunchback of Notre Dame succeeded in telling other aspects of Victor Hugo’s story.

Glenn Casale has directed a very engaging and once in a lifetime musical experience, in collaboration with the musical direction of Dennis Castellano and the choreography of Dana Solimando. There is nothing Disneyfied about this version of The Hunchback of Notre Dame. Instead, this Hunchback is about as relevant and timely as ever, just not so happy.

Leave Her Alone!
Faith for Failures