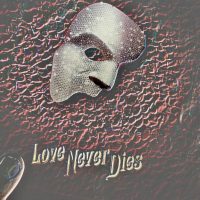 When I told my wife, Jennifer that we were seeing the North American touring production of Love Never Dies at the Paramount Theatre in Seattle, she asked me if it was a “new James Bond musical.” I said something such as “No, although I would totally see a James Bond musical, Love Never Dies is actually a sequel to Andrew Lloyd Webber’s Phantom of the Opera and that’s pretty much all I know about it.” She smiled and I knew that was enough detailed plot exposition to get her interested in seeing the show, even if none of the characters would be named Goldfinger or Octopussy. Once again, I’d totally go see a James Bond musical. However, the opportunity to see the sequel to the iconic, modern operatic, chandelier dropping, fog machine loving, melodramatic, mask wearing, worldwide sensation known to many simply as Phantom, was something my wife and I could not squander. Particularly as the Phantom of the Opera was one of the first musicals we had seen together.

While Jennifer and I were still dating and still fully looking to apportion any cultural romantic reference as a confirmation of our love, we experienced a Phantom of the Opera production that was a formative experience in assuring our lifelong love of musical theater. The over-the-top dramatic excesses of the original won us over with the sheer power of the music, the beauty of the voices and the immersive spectacle of the theatrical experience. We were hooked, even if the story revolved around a rather dysfunctional understanding of love. With our past love of Phantom, we headed into Love Never Dies excited to see whether this sequel was an extension of Phantom’s wonder or just an attempt to make a ton of money off an original success. What we found was a very enjoyable night of musical theater that frankly surprised my cynical expectations.

Honestly, I don’t listen much to the original Phantom of the Opera music because not all of the music and instrumentation has aged well. A lot of time has passed and some rather ingenious musical innovations have happened since Andrew Lloyd Weber introduced us to his version of the mask-wearing tormented lover boy. Entering the show, the question for me was how would they evoke the original Phantom magic, without making this new production dated? It appears Andrew Lloyd Webber (music) and his Love Never Dies creative team of Glenn Slater (lyrics), Charles Hart (lyrics) and Ben Elton (book) were concerned with this same issue. Consequently, they start the show with a number that is extremely evocative of the original musical. The Phantom sings behind a fine mesh veiled stage from his perched loft of isolation, lamenting his lost love and the torment it has brought him for ten years. He sings to the portrait of his estranged musical muse and love, Christine, hoping for a day when she will once again give voice to his music.

This opening piece takes us back to where we last left the Phantom. Christine has moved on with her life and we have moved on with our lives, but he has stayed in the isolation of his heart for 10 years, waiting for Christine and for us to return. And so we do. At first, the opening scene made me nervous as it felt too much like the old Phantom, but then the song ends and the mesh veil lifts and we are ushered into a new world of the Phantom and into a new story with its own wonderful merits. This seems to be the goal of the creators, to take us back to where it all began or all ended and then to quickly move us forward into a new, vibrant reality.

Vibrant is an apt description for the overall theatrical experience of Love Never Dies. Instead of a stuffy Paris opera house, the Phantom now lives within the surreal landscape of Coney Island, surrounded by electric flickering lights, enchanting carousels, twisted rollercoasters, lowbrow side shows and musical entertainment for the masses. The stage and lighting design of Love Never Dies masterfully portray the magical chaos and corrupted beauty of 1907 Coney Island. I was truly enamored by the incredibly beautiful, complex and seemingly perpetually moving stage design threaded throughout the musical. The stage design is impressive but not gimmicky, grandiose but entirely beneficial in creating a memorable night of visually spectacular images. The mirror work alone makes the night full of pleasant surprises, although I would caution that one might need a pair of sunglasses if the lighting and mirror positioning happens to grace your particular seat. A woman five seats down from us eventually shielded her eyes with her program to combat the mirrored reflection that had singled out her position in the auditorium.

The set design and lighting is grandiose and enchanting and so is the singing! Love Never Dies carries on the tradition of being partially operatic in style and tone. This stylistic choice may work against realism, but it certainly lends itself to some splendid live theatrical performances. Meghan Picerno as Christine is truly a marvel to hear. To be frank, even if I despised this musical, I would still have felt grateful for the opportunity to hear her voice. In her grand climactic song, she brought me to tears, not because of the plot, but because I felt genuinely privileged to experience such vocal beauty. I was reminded of the time I sat through a dreadful rendition of Candide (I assume all renditions of Candide are dreadful) to experience a phenomenal rendition of Glitter and be Gay. I remember thinking this night was worth everything for this one moment. I believe many will feel the same listening to Meghan Picerno release her voice into another stratosphere in the closing minutes of the show.

Gardar Thor Cortes is a worthy Phantom who masters well the challenge of trying to connect not only with Christine but with the audience, while hiding behind a large mask and heavy make-up. Sadly, no one in the production ever gives the Phantom the sensible advice of maybe just coloring and combing his hair instead of going through such an elaborate cosmetic ruse. You’d think after ten years he might also trade out his white mask for something more earth-toned. Regardless, Cortes does his best to make an extremely over-the-top and often really jerky character seem somewhat lovable. Speaking of jerky, Sean Thompson as Christine’s husband does an admirable job of being complex while also being a really bad husband and father figure. Honestly, there were times in this production when I wanted a chandelier to drop on and kill every one of the male leads. Christine may have a beautiful voice, but she has father issues she seems to want to resolve through very destructive relationships. Here is a hint Christine, sure, you can love someone for what’s on the inside, but you should also probably not get too enamored with people who on the outside are repeatedly emotionally abusive.

However, Love Never Dies is not about marriage or relationship counseling, it is about big lavish sets, booming voices and extreme plot points. As a result, people are not necessarily that nuanced in their character development. Probably the most well formed character is Meg, played by Mary Michael Patterson. Meg’s complexity as a troubled, conflicted starlet-want-to-be in the shadows, makes her role the most complex and interesting. As far as voices go, every actor holds their own, but special praise must be given to Jake Heston Miller, portraying the 10-year-old Gustave. It appears he shares this role throughout the show’s run with Christian Harmston. Jake’s role is demanding from both a staging and vocal perspective. He masterfully succeeds at being the forever caught-in-the-middle boy with the angelic voice for music.

For me, the biggest weakness of Love Never Dies is in its overly sincere dramatic operatic style of presentation. I could have used a bit of humor and a little more realism. However, I don’t know if you can have realism when you’ve got a phantom in a white mask haunting a theme park. The more realism and humor brought into the show, the more the serious elements might appear to be a little absurd. I find this same problem when Hollywood wants to make me cry over the plight of a Transformer or a Spiderman. Hey, Spiderman would make a good musical.

Love Never Dies is more than just a love story, it is also an allegory of the theater. The Phantom in many ways represents producers, writers, directors or creators who are tormented by their passion to create, but bound by their need for someone to give their imagination voice. Christine represents the desire of the artist to be heard, praised and appreciated; the desire to find the perfect song or performance to embody on the stage. She represents the compromise artists make when they partner with creators who cannot differentiate between wanting to work with the artist or use the artist as a tool to satisfy their torment. The Phantom uses Christine to give voice to his creative passion. Christine needs the Phantom to make her voice truly sing and to earn praise from the audience she desperately craves. Sadly, no one is satisfied in this compromise, as they can only unite around the art they create or the music they make, instead of the tormented love that motivates the collaboration.

The title is Love Never Dies, but it is really Love of the Theater Never Dies. What the Phantom and Christine have in common is not so much love for each other, but love for the music they create when they are together. Each finds meaning and sustenance in the music they make together, even though it does not ultimately satisfy their relational longings. The constant search to find connection through creating is a primary theme that runs throughout Love Never Dies.

If you loved the original Phantom, you’ll want to see the sequel. It is contemporary enough to be engaging, but nostalgic enough to evoke some good memories. It is grand spectacle theater with the voices to match. It is a testament to the truth that whether or not love never dies, the theater is going on as strong as ever.

Reconciliation: The Motivation of My Life
The Church Hate Industry