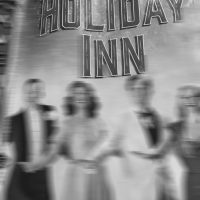 By Douglas Bursch on December 2, 2017 in Review

There is no way for me to write my review of the 5th Avenue Theatre’s production of Irving Berlin’s Holiday Inn without sounding racist. Incidentally, when people use the qualifying phrase “sounding racist” they are usually just being racist.

Here is the big problem. The 5th Avenue Theatre’s current, not racist version of Holiday Inn draws its source material from the original very racist 1942 Holiday Inn movie starring Hollywood legends Bing Crosby and Fred Astaire. Here is my problem: as a child, I really enjoyed watching the original, racist, Holiday Inn movie. Although I knew there were clearly wrong behaviors and scenes within the movie, I minimized and explained those problems away as simply signs of the time. As a child, I watched the offending scenes with a slight amount of confusion and a fair amount of detached bewilderment. As I grew older and my social conscience developed, I began to feel shame and unease with the clearly racist content. To lessen my discomfort, I would simply fast forward past that one super offensive song and dance number where everyone dressed up in black face and put on a minstrel show to supposedly further an important plot point. I’d just pretend the scene wasn’t there so that my conscience could avoid listening to the heavy set Aunt Jemima type black maid sing with her two fatherless children, “When black folks lived in slavery, who was it set the darky free? Abraham…” Instead, I could just pretend that song and dance had faded into the distant past. As an adult, I was delighted to stumble upon an edit of Holiday Inn that whitewashed all offending scenes from the original. In that Hallmark Channel edited version, Bing Crosby was now allowed to sing “I’m dreaming of a White Christmas, just like the ones I used to know…” unencumbered by the black face racism we used to know.

One might ask why I didn’t immediately reject the movie Holiday Inn once I became aware of its extremely problematic racism. This is where any justification will demonstrate my racism and privilege. I’d like to believe that I have held onto parts of Holiday Inn because it contains some amazing stand alone music and dance numbers, along with a pretty good love triangle. As a child I was and as an adult I am mesmerized by Fred Astaire’s dancing. Astaire’s New Year’s Eve inebriation dance and firecracker Independence Day tap performance stand as two of the most creative and inspired musical movie moments ever created. Bing Crosby crooning the words to White Christmas and I’ve Got Plenty to Be Thankful For still seems to be the purest and best form for hearing the lyrics of these iconic Irving Berlin tunes. Along with the dance and tunes, there is also a genuine on screen comedic energy and Golden Age of Hollywood celebrity magic permeating much of the original movie. All of these elements made the film something I wanted to love, even though it had so much morally wrong with it. However, these justifications are simply justifications rooted in my privilege. The simple reality for why I did not abandon Holiday Inn is because I am white and I was more concerned with preserving the legacy of Bing and Astaire than identifying with those they and I have oppressed.

This brings me to the modern, non-racist musical theater stage revision of Holiday Inn I experienced last night. This new version has written racism completely out of the plot. There is no more black face number, no more stereotypical maid, no more hint of racial injustice. If you had never seen the original, you would wonder why I even needed to bring up that whole unpleasant past. It is all forgotten now, the songs have been rescued, the plot has been revised, the happy ending has been secured and no one has to feel any shame.

This new version is a worthy presentation with some excellent singing and dancing. Understanding that imitation would only lead to failure, the actors create their own versions of Bing and Astaire that have their own voice and step. Eric Ankrim’s Jim Handy is a lovable idealist with a sweet tenor voice. He is a sympathetic protagonist that we want to succeed. Matt Owen’s Ted Hanover has the unenviable task of trying to recreate Astaire, including the firecracker tap dance with some minor and very successful moderations. He succeeds greatly at this seemingly impossible task. Well done to the entire crew for pulling off such a technically difficult dance number. Taryn Darr makes the most of her flighty Lila Dixon role and Sarah Rose Davis, playing Linda Mason, is really the highlight of the show, making the most out of the most well developed character in the production. Davis has a gorgeous voice and an engaging stage presence that matches well with Ankrim’s understated humble man charm. Lorna Luft’s Louise role brings a broad comedy relief to the show that is one of the pleasant highlights of the night. In fact, it is as if her role is written for another show. While the comedy stylings of the Louise character seem to fit in with the feel of a 1940s romantic comedy, the character development of the rest of the cast has been modernized in such a way that the show falls a little flat.

In the original Holiday Inn movie, there is a very real, conniving love triangle, plus one. The original movie is about how people can be lovely to each other on stage, but terrible to each other in real life. The original movie shows how partners can work so well on stage that they mistakenly believe they will work well together off the stage. This new stage production tries to make everyone nicer and I assume more believable. Consequently, there is less conflict between all parties involved. This removes a bit of the tension in the show and flattens out the emotional arc. Consequently, you are not that invested in the outcome of the show. In my opinion, a good romantic comedy needs to have some good romantic conflict or romantic connection. Holiday Inn the stage musical is more about lovely songs and dances than strong dramatic, relational or comedic tension. In other words, I liked the show, but I felt the new book took away some of the key relational magic of the original.

I think most people who go to Holiday Inn at The 5th Avenue Theatre will enjoy a special night. The big band music is gorgeous, the set design and lighting is spectacular as usual. That cast does their work well. Even so, I’m still left with a bigger question, why are we as a society resuscitating or resurrecting this source material? Why do we need a non-racist version of Holiday Inn to carry us into the next generation? Maybe some expressions need to simply die and fully new expressions need to take their place.