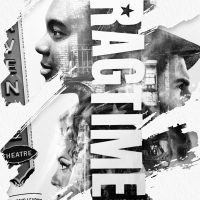 Sometimes you don’t know how soul worn weary you are, until you stumble upon a momentary resting place. And sometimes you don’t realize how much you need music, art and beauty until your eyes are tearing up in a darkened 5th Avenue Theatre watching the opening night production of Ragtime The Musical.

America’s current, or might I say endlessly repeating, political and racial climate makes Ragtime The Musical both keenly relevant and powerfully thought provoking. Ragtime is all about the collision of humanity and the people who prosper and suffer within an American dream, fueled by capitalistic greed and dominated by white male privilege. Ragtime is about the melodies people try to make when the world is within and outside their control.

The musical Ragtime demonstrates how beautiful music, art, love and relationships can be formed between any groups and in any situation, regardless of privilege. However, Ragtime also reveals how the oppressive systems that surround these moments of beauty ultimately predetermine our fate. Love, hope, passion and desire find voice not in our shared humanity, but in whether or not we align with the right economic, ethnic or racial group. Although every human can find moments of joy, meaning and purpose while living within a corrupt culture, the injustices of the culture will systematically harm certain people groups, regardless of their best intentions or best behavior. In other words, no amount of optimism or even an optimistic song can overcome the effect of systematic racial or social injustice.

While watching Ragtime, I realized how much I’ve given up on the possibility of hope and progress of late. It has been awhile since I’ve believed in the possibility of true racial or social change. Even so, listening to the mesmerizing vocals of the Ragtime cast, I felt a strange sense of melancholy hope. I was reminded that there is always the possibility that beauty can be found or created in even the most disillusioning seasons of life.

I’m not going to write a review that highlights the individual members of the Ragtime production. I don’t want to break the show into parts. Instead, I just want to say that Ragtime ministered to my soul. I really had no idea how much I needed this night of musical theater until I found myself, teary-eyed and soul-warmed, listening to an ensemble cast pour into my heart a story about the joy and sorrow of America. Ragtime reminds me that the American Dream did not make room for some of the most beautiful people on the face of the earth; their best efforts were rejected and their lives were forgotten. Even so, their songs are worth singing.

Pursuing Vision Without Power or Platform
The Community of God: A Theology of the Church From a Reluctant Pastor