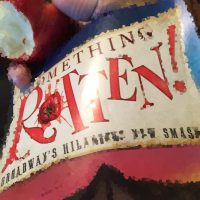 Something Rotten revolves around two unsuccessful brothers (the Bottom brothers) who are tired of being overshadowed by the rock-star success of their less than scrupulous contemporary, William Shakespeare. To try to compete with Shakespeare, they become aware of a strange new form of theater known as the musical. What follows is a lot of laughter and many subtle and not so subtle references to just about every popular American musical ever written. The opening night crowd of 5th Avenue Theatre aficionados ate up the musical theater references with an exuberant joy similar to Comic-Con attendees hearing an announcement that Blade Runner will, in fact, be a trilogy. The two biggest and best numbers, “A Musical” and “Something Rotten,” evoked some of the loudest laughter I have heard at an opening night performance. Almost all of the laughter revolved around one silly premise being expressed a hundred different ways.

Something Rotten is not something deep or something profound. It is just something very fun to experience. The cast does excellent work and the show runs on all cylinders when everyone is on the stage singing and dancing in one big show-stopping culmination of farcical chaos. It is clear that director Casey Nicholaw is also a gifted choreographer who knows how to fill a stage with joy.

There are weaknesses in the show. The relational interests and conflicts don’t necessarily have much depth or progression. And, as with many American musicals, there is the obligatory ridicule of Christians and spiritual piety. As a pastor, I must accept that on stage my lot will most likely be among the villains. On a side note, there is plenty of double entendre to amuse the aware, yet safely confuse the unaware. Although the production quality was professional, I had difficulty hearing some of the actor’s vocal performances clearly. The microphone for Minstrel (Nick Rashad Burroughs) and Shakespeare (Adam Pascal) did not differentiate their voices well from the music. It seemed, at times, the vocal performances sounded tinny and lacked mid and bottom range or bass tones.

As far as the performances, the cast was well matched. Nick Bottom (Rob McClure) and Nigel Bottom (Josh Grisetti) complimented one another in voice and style as struggling brothers who truly care about each other beyond putting on a big show. Adam Pascal played Shakespeare like an intelligent Billy Idol, giving him the right amount of ego, but still a needed approachability. Maggie Lakis (Bea) did much with a part that seemed to lack integration with the rest of the story. Her voice has a beautiful tone that creates a lovely contrast to the larger, big sound ensemble numbers. Autumn Hurlbert’s Portia is believable but zany, which isn’t easy to pull off. Although not having a large role, Nick Rashad Burroughs (Minstrel) brings great energy, a beautiful voice and a powerful stage presence to the show. Blake Hammond as Nostradamus gets almost all the best lines and the best part of the show. He does not fail to deliver the goods in his ridiculous role, which is a really good thing because Something Rotten is, at its best, a really silly farce that embraces our love of the American Musical in all of its wonderful, strange goodness. If in your everyday life you wish you could break into song more often, Something Rotten is the show for you.

The Dark Side of Community
The Social Media Church