After watching The 5th Avenue Theatre’s opening night production of The Secret Garden I was reminded of my recent trip to the Skagit Valley Tulip Festival. While visiting the tulip festival I was at first overwhelmed by the acres of vibrantly colored tulips in full bloom. From a distance, the rows of flowers looked as if they were solid ribbons of color. Some fields were planted with thousands of flowers from the same tulip variety. Each flower looked so perfect and so similar to all the other flowers that it was difficult to focus on the individual beauty of each tulip in light of the overwhelming uniformity of the thousands of tulips that surrounded it. The magnitude of this endless uniform beauty almost dulled the senses, leading me to want a smaller garden, with more variety, differentiations and character. Along with the endless rows of glorious yellows, pinks, reds, and whites, I needed a smaller, more nuanced garden that highlighted the complexities and diversity of each individual flower and variety. Thankfully, I was able to find at the tulip festival a few not so secret gardens that presented a more complex and rich picture of such a beautiful flower. I thought of this after watching The 5th Avenue Theatre’s incredibly gorgeous, mesmerizingly beautiful, expertly directed, finely acted, yet surprisingly monotonous presentation of The Secret Garden.

I wish I could put this some other way, but The Secret Garden is beautiful like an endless row of similarly colored tulips; gorgeous to first experience, but eventually you get bored. There are many beautiful slow songs in The Secret Garden. In fact, it is primarily a musical of slow songs, strung together. They are lovely songs to hear. However, they invade the show at a ratio disproportionate to one’s ability to sit still for over two hours. Whether beautiful or not, humans can only sit so long without some sort of change of pace or pacing. Although opening night audiences are often generous in their praise and applause, I heard far more chair squeaks than normal and couldn’t help but notice that the man three rows in front of me took a sip from his wine sippy cup every time a new slow song started up. I could also hear increased audible sighs from the two kids behind me as the night wore on. Love of a beautiful ballad can only pique a child’s interest for so long.

However, if you love beautiful, slow ballads, you will love this show. In fact, there is much to love about The Secret Garden. The set design is some of the most masterful work I have ever seen on a Seattle stage. The acting and singing were flawless and David Armstrong seemed to get the most he could out of the original source material. Even so, it seems to me that the source material is the greatest flaw of this production. There was simply not enough variety and variation in the songs and plot to hold my interest. This was not the fault of the actors, who did their best to bring life into the script. I really don’t think they could have performed a better rendition. I simply needed more nuance and variety. I also could have used some comedy and quirkiness. If the main premise of the musical is how we deal with death, you have to at least give me some humor amidst all the longing for lost loved ones. Without any humor or quirkiness, the love becomes melodramatic.

From reading the promotional material, it appears there is talk of possibly taking The Secret Garden back to Broadway. If this is truly a goal of the creators, I would encourage a serious rewrite if they expect a long run. The following are some possible suggestions:

-Have at least one of the ghosts in the ensemble cast do, sing or say something funny or quirky. Make them slightly different than everyone else; bump into furniture, exit or enter awkwardly. Give one of the ghosts a personality other than just the collective “We are all here to serve Mary Lennox” vibe. Frankly, it is a bit odd that if you die as a servant in the household of a little girl, you are forced to follow her to England. Why not bring at least one somewhat disinterested ghost.

-Include at least one more happy, humorous song and dance number in both act one and act two. The first real happy dance number comes far too late in the show. Without any fast songs, there are no fast dances. This kills the energy and gives no ebb and flow to the production.

-Make at least one of the secondary characters more quirky, humorous or surprising, or at least exaggerate whatever humor is already in the show. It seems Mary Lennox could at least have a much more humorous relationship with Dr. Neville Craven. I’m not calling for slapstick, but just for some sort of change of pace. Even the main love relationship between Archibald Craven and his departed wife Lily needs more depth and nuance than endless yearning songs.

I’m aware that this review sounds harsh. Let me be clear that my problem with The Secret Garden is that I believe it is lacking a key element. What is present is gorgeous and exceptionally well done. The opening 20 minutes are mesmerizingly, hauntingly beautiful. The production value is excellent and the songs are wonderful. However, in the final analysis, the musical felt tonally monotonous, as if I were staring out at acres of the same flower. It is a gorgeous view, but after 30 or 40 minutes, I began to crave another garden, one that I did not find. 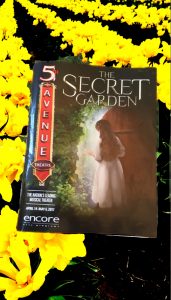