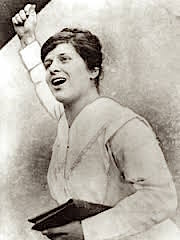 I believe both men and women are called to preach and teach the word of God. These are the last days, and in the last days God has poured out his Spirit on all flesh. Therefore, the sons and daughters of God will prophesy the good news of the Kingdom of God to all flesh (Acts 2). As Christ abides in all believers, he will not limit his voice to only one half of the human population. Instead, Christ will speak in and through all his children to everyone who needs to hear his voice.

This is a conviction I’ve held my entire life as I regularly experienced my mom preaching and teaching a gospel that transformed the lives of both men and women. I’ve had others try to argue me out of the proposition of women leading, but I simply do not follow their logic from a biblical or experiential point of view. Regardless, we all must walk with integrity the principles we genuinely believe. I genuinely believe that women can and should pastor churches.

My denomination was founded by a woman, Sister Aimee Semple McPherson. As a young woman, she traveled the country and the world proclaiming the good news of Jesus Christ. Along with her evangelistic work, she formed a Bible college that produced some rather passionate church planters. Many of these church planters were women. The fact that she did this during the first half of the twentieth century is rather remarkable, especially considering the low view many had of women in authority.

Eventually, Sister Aimee formed a denomination (The Foursquare Church) to license and send out all of the pastors she was training. In the early years of my denomination, there were a number of women who were lead pastors in churches they had founded. Sadly, over time, this changed. As time passed and pastoral transitions occurred, the Foursquare denomination began to model the predominant biases and prejudices of the culture that surrounded it. Consequently, men took over almost all positions of authority.

This has led to a great incongruity between the Foursquare Church’s doctrine and practice. Although professing a theology that supports women as church leaders, in practice, the denomination has frequently not modeled that truth. This incongruity has also been evident in other denominations and churches that profess a high value for women in ministry. To overcome this disparity between theology and practice, Foursquare is trying to find better ways to encourage, develop, and appoint more female pastors in senior or lead pastor positions. I am very proud and supportive of this renewed focus on the importance of women in leadership.

Even though our intentions may be sincere, unfortunately, it is difficult to change existing church cultures, preferences and practices. Implementation of our convictions and desires has been difficult. There are many reasons it has been challenging to facilitate a better representation of women in church leadership positions. It is not my intention to justify or explain away any injustices that might be present when it comes to encouraging women to preach and lead. Instead, I’d like to address some of the practical hinderances that make it difficult to increase the role of women within the pastorate.

Training is crucial but insufficient

For women to become pastors and leaders, there definitely needs to be educational training that is intentionally geared to supporting and defending the mandate for female church leaders. This means bible colleges and training programs must be purposeful in using gender inclusive language and curriculum. Also, special notice must be given to the unique challenges women face when training for the pastorate. In many theological communities, women find themselves in classrooms primarily led by men teaching primarily male students.

While working on my Masters of Divinity, in my first preaching class, there were about 30 men and two women. As part of our class, every student assessed the preaching of the other students. Watching one woman preach to a room full of assessing men just seemed incredibly inconducive to facilitating more female pastors. Although the doctrine of the seminary was inclusive for female leadership, the environment was incredibly male-centric. In light of this problem, educational communities and systems must continue to intentionally work to level the academic playing field for female theologians and future female pastors.

It is important to note that many institutions are trying to raise up a new generation of female leaders. Even so, I do not think education will solve the greatest hindrances to better gender equality in leadership. The sad truth is we are graduating women from our Bible colleges who do not have the same employment opportunities as their male counterparts.

One of the greatest problems for female pastors is the lack of job opportunities. This is compounded by the culture of normal sized churches. Most churches are only large enough to pay for one full-time or part-time pastor. When a church of this size has a pastoral transition, the congregations almost always want a pastor of the same gender as the previous pastor. In other words, churches that previously had male leadership almost invariably hire another man for the senior pastor position. This might be an issue of familiarity or prejudice. It can also be an issue of fear. In any pastoral transition there is always fear that individuals will leave the church if they are not satisfied with the new leadership. Within this fear, hiring a woman pastor can seem like more of a risk than a reward. I am not condoning this logic, but I do believe it comes into play during the pastoral transition process. In fact, this same problem most likely exists regardless of the size of the church. Since women as senior pastors are far more rare, some churches and denominational leaders are reluctant to change the culture of a church and appoint or elect a female pastor.

The second hire is another man

If women are to work their way into the senior or lead pastor position, they will need opportunities to work in multi-staff churches. Once again, the cultural realities of multi-staff churches often work against raising up female preachers/teachers. To put it as simply as possible: the second pastoral hire in churches is often a man. Again, the reasons for this are complex with certain biases and prejudices at play. Regardless, I believe there are also some practical reasons men hire men for the second pastoral position. Ideally pastors want to have a strong, healthy and close working relationship with their associate. I think some men and elder boards for that matter, are uncomfortable with a close working relationship between men and women. Whether or not it is valid, there is a fear that a woman and man closely working together within the church community may lead to the appearance of impropriety or to actual impropriety. Whether or not this fear is valid, it does influence the decisions of some churches and pastors. Ultimately, many pastors who are working alone desire a close friendship and kindredness with their pastoral staff. With this desire, they may be reluctant to hire a woman.

I know as I write these words some may be rolling their eyes at the seemingly backwards logic of leaders worrying about inappropriate relationships or the appearance of inappropriate relationships within a church’s staff. Even so, I think these concerns are present in some communities and do limit the opportunities for female pastors to be the second hire in a church.

I have noticed that many churches do not hire women until there are already two pastors on staff. In these settings, the woman is often hired for a specific need within the church that often does not include preaching and teaching in the main service. Usually the position is for a specific department such as administration, women’s ministry, children’s ministry or youth ministry. Although it is important for women to lead in these roles, these positions are not necessarily jobs that lead to moving into the senior pastor position.

The limited opportunities for women to find senior pastor leadership positions are daunting. Churches led by males often transition to another male leader. If there is a position for a female pastor, it is frequently only in multi staff churches, in areas that do not lead to preaching or teaching within the main service.

The solution is church planting

All hinderances to women finding church leadership positions should be examined and removed. All prejudices and arcane biases should be identified, addressed and rectified. Even so, some obstacles are harder to remove than others. Consequently, if the church wants to rapidly infuse its leadership with strong, female leaders, we need to focus on the areas that best lead to immediate results. This is why I believe in actively promoting, facilitating and resourcing female-led church planting.

I personally believe that church planting is our best hope to rapidly infuse the church with women as senior or lead pastors. A church that is founded by a female pastor is able to set the culture and expectations of that community. Instead of dealing with the political obstacles and cultural biases of existing churches, church plants form their community around the ideals and practices of the planting team. A church plant led by a female pastor will be able to advance values, vision and mission without wasting as much energy on reactionary battles concerning the role of women in ministry. Church plants also allow young or newly licensed/ordained women to actively walk out their calling of leading a church. Instead of being marginalized and limited to certain culturally acceptable positions within larger churches, they can immediately start living out their calling to lead a church.

The denomination I serve was founded by a woman who encouraged other women to go out and do what she was doing. She equipped and released women to follow their calling to pastor and lead churches. It is no surprise that she encouraged them to church plant. Sister Aimee understood that instead of waiting for the culture to change, she had to create new culture to contrast the existing biases within the church. Instead of waiting for the institutions to change, she simply formed new institutions and churches that held and demonstrated the value of women in ministry.

I understand that I am not alone in my desire to see many more women as senior pastors. I know that my denomination, as well as other denominations, are working hard to bring about change. Regardless, I write this with the sincere hope that many of us will work together to raise up a new movement of God-ordained, world-changing, female pastors. I believe we cannot simply wait for existing church cultures to change. Instead, let’s raise up some new churches that fully embrace the voice of God in both his sons and daughters.