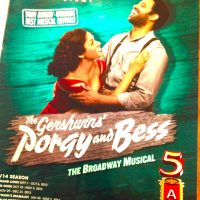 The national touring company version of the recent Tony Award winning revival of The Gershwins’ Porgy and Bess has reached the 5th Avenue Theatre. If you desire to hear powerful melodic voices sing haunting harmonies and melodies within a surprisingly complex musical drama, then buy a ticket before Porgy and Bess leave town. The choreography of Porgy and Bess is understated but powerful; the direction takes confidence in the weight of the music and the abilities of the performers.

There is little need to create perpetual scene changing transitions. The buildings and walls are the same buildings and walls from outside and from within. They are a painted canvas of pieced together, discarded wood and metal. The people are the story; they are the life of the story that contrasts the bleakness of Charleston’s Catfish Row. At first, I was taken aback by the minimalistic set. My cynical side assumed this is one way a touring company is able to save money.

However, I quickly dissuaded myself of that notion once the shadows hit the wall. There are two or three times within the show when the lighting shifts and the movement of the performers is silhouetted on the wall. In these moments, the shadows become spectators to the spiritual drama of the room. The shadows remind us that it is the souls in the room that give the room meaning. All else is just a backdrop for the casting of shadows.

Porgy and Bess is more than a love story; it’s a story about the strength that abides in weakness and the weaknesses that perpetually tear down those who seem so strong. It’s about abuse, sex, worth, community, poverty, race, drugs and the seeming duplicity of our yearnings. It about how we yearn for protection but independence, intimacy but freedom, opportunity but safety. It’s about how we deal with being trapped and feeling trapped. How we use drugs, love, work, community and religion to rescue us from that which seems completely out of our control.

Porgy and Bess both personify different forms of strength and weakness. Porgy, played by Nathaniel Stampley, was born with a disability that has defined him as separate from the group. His biological weakness has given him a greater appreciation of grace and a powerful need to both give and receive love and acceptance. Although Porgy’s disability has led to the development of noble character, it has also led him to limit his faith in what he can accomplish or aspire to in life.

Bess, portrayed by Alicia Hall Moran, is a woman who is at first marked by moral weakness. She is first perceived by others as a sexually promiscuous, substance addicted, foolish woman. As the story unfolds, Bess becomes a far more varied and complex expression of weakness and strength. We begin to view her as a woman with passion for what is right and good, or at least as someone who wants good for both herself and others. Even so, her worth has been so marred by past trauma and present fear that she seems unable to convince herself that she is worthy of such goodness.

It would be too simple to portray the love of Porgy and Bess as the uniting of social outcasts. Porgy and Bess both have worlds in which they abide…it’s just that those worlds seem to be unable to satisfy what they long for the most. Therefore, Porgy and Bess meet, and try to become that which the other desperately needs. Both Stampley and Moran do a masterful job portraying this reality.

After watching the musical, I told my wife that I am not qualified to give a review. I told her that there are just too many levels to this musical for me to rightly understand it. With those words, I thought I’d pretty much absolved myself from having to write much of anything. However, when the morning came, I couldn’t get certain thoughts out of my mind. So, unqualified and all, I’m trying to articulate the experience.

Porgy and Bess opens with “Summertime” and the resulting effect is one of the most instantly powerful moments of any musical I’ve seen. Immediately, my eyes began to well up as the powerful melody of “Summertime” was matched with simply awe inspiring voices. To be frank, even if Porgy and Bess had a terrible, subpar plot, the music and voices would still make the show worth seeing. I almost wish the producers of Porgy and Bess would include one ordinary or adequate singer within this cast of magnificent voices. That way, we’d be frequently reminded throughout the show of just how great everyone else is singing.

The producers have not followed my suggestion, so what we are left with is wall to wall mastery of the human voice. If you don’t believe me, listen for the part of the show when you hear the word “strawberries.” I don’t think I’ll ever be able to eat a strawberry again without remembering that angelic voice. And no, the use of angelic is not a cliche; it’s simply the most accurate word I can think of to express the word “strawberries” being sung in a manner that brings me to tears.

The cast is strong from beginning to end. Notable stand outs are Alvin Crawford as the unstable and unpredictable Crown. I personally enjoyed how, in some scenes, he embodied authentic realism, while in others he became an exaggerated expression of villainy and dangerous instability. Kingsley Leggs portrays the character Sporting Life in a manner that makes his seemingly wicked meddling appear understandable, even sympathetic. He is more than just a fast talking pusher, he is an embodiment of the possibility for a quick answer to prolonged pain. He’s also some needed comedic relief in relation to the heavier matters of the show. All things and voices considered, this cast is one of the best ensembles I’ve ever experienced.

The overall tone of Porgy and Bess might make the musical unapproachable for some audience members. It’s a drama that’s rooted in a perpetual foreboding and heaviness. It doesn’t mean there isn’t joy or life in it, but it does mean that we are going to travel a path where sorrow and loss are a constant in the midst of momentary joys and celebrations. To create this somewhat solemn tone, the pacing might seem long in parts. For me, this steady pacing is necessary to give weight to the relational and emotional arc of the story. It also makes the momentary, soft colored hue of the island picnic scene even more vibrant and captivating.

There were many aspects of my Porgy and Bess experience that I greatly enjoyed. However, I also couldn’t shake a couple disconcerting thoughts. The first thought has to do with musical theater in general. The Gershwins’ Porgy and Bess originally premiered on October 10, 1935 at the Alvin Theatre in New York (renamed the Neil Simon Theatre in 2002). Even though the musical has been around for a long time, I’ve never seen it performed and up until last night, I was completely unaware of the plot.

As I watched Porgy and Bess, I found myself being consistently surprised by the music and plot choices. Throughout the night, I found Porgy and Bess to lack many of the musical cliches or formulaic structures that permeate modern musicals. I was taken aback by just how fresh Porgy and Bess felt. And this is the part where I might seem like a theater snob; it feels to me that the freshness of Porgy and Bess stands in stark contrast to some of the musical theater that is currently being created. I certainly did not experience these kinds of risks or surprising theatrical plot twists while watching Jersey Boys, The Addams Family or Aladdin. This is not to say that there is something wrong with more approachable, predicable theater fare, it’s just to say that I found myself longing for more modern equivalences to such masterpieces as Porgy and Bess. Not modern copies in form and style, but modern works inspired by a desire to re-imagine, as David Armstrong perpetually says, “our great indigenous art form, the American Musical.”

There was one other concern that I couldn’t shake from last night’s presentation. Porgy and Bess is, for the most part, an all black cast. It is a musical with profound artistic and historical importance in the development of American theater and in the history of African American civil rights. Sadly, last night’s audience did not represent the diversity that was present on stage.

Like most opening nights, the room was, for the most part, a very white, wealthy and somewhat elderly affair. I am well aware of the complexities of an opening night and the 5th Avenue’s need to appropriately accommodate sponsoring theater patrons, benefactors and reviewers. Even so, I was once again reminded of the uncertain future of an American musical culture that has its roots in a very white and wealthy fan base. The question remains whether or not modern musical theater will create, fund and support musical works that are relevant to the increasingly diverse demographic of our nation. From my limited perspective, it still appears that Broadway is, for the most part, unwilling to risk alienating its current fan base. With this in mind, it makes Porgy and Bess seem all the more a breath of fresh air. 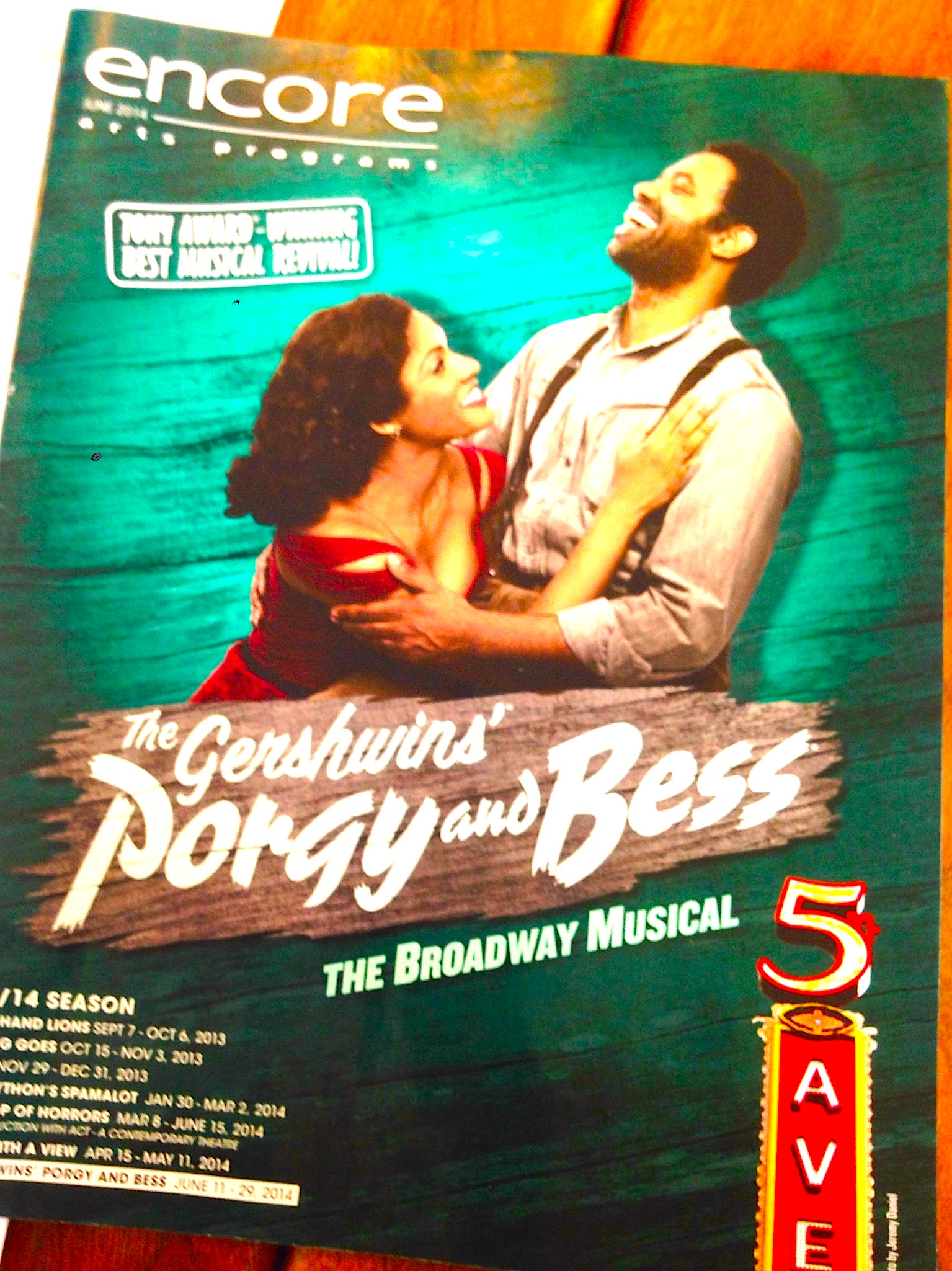 To My Pastor Friends: I’m Proud of You!
Mark Driscoll, Mars Hill and the need for substantial change