The 5th Avenue Theatre’s production of Gilbert & Sullivan’s The Pirates of Penzance is the very model of a modern major musical. Simply put, James Rocco’s rendition of this theatre classic is a vibrantly fresh, clever, laugh out loud, hilarious romp. After writing “romp,” I decided to look up what it actually means. The internet suggested that to romp is “to play or frolic boisterously.” That sounds like an adequate description for the comedic energy oozing from the 5th Avenue Theatre’s cast as they tear into and savor every last morsel of Gilbert and Sullivan’s zany script.

I am a newbie when it comes to experiencing previous works of The Pirates of Penzance. I’ve heard and hummed a couple of the most famous tunes, however, I have never seen a full production. Although aware of Gilbert & Sullivan’s crucial role in the development of the American musical, I was less aware of whether or not their work would resonate with a modern audience. Hearing that The Pirates of Penzance was penned in 1879 left me concerned that much of the humor would be too dated or too historically bound to be approachable. In other words, I was afraid I wouldn’t laugh because I didn’t understand or get the joke. That fear was quickly vanquished in the opening minutes. The 5th Avenue Theatre’s production of The Pirates of Penzance is as fresh and approachable as any work I’ve experienced. My wife and I laughed so much that on the way to the parking garage she remarked, “I don’t think I’ve every laughed that hard at anything.”

As someone relatively new to the Seattle theater scene, I am consistently amazed at the effort The 5th Avenue Theatre takes to make their productions approachable. It is clear they try to present every musical as if it is the first time it has ever been encountered. Although Gilbert and Sullivan aficionados most assuredly will enjoy this production, a first time experience will be just as or even more invigorating. Almost every joke and comedic twist was communicated in such a way that I could participate fully in the hilarious absurdity of the story. It is clear that the director and cast carefully choreographed their pauses and enunciations for the fullest comedic effect. The only exception to this clarity being the appropriately fierce tongue twisting tempo of “I Am the Very Model of a Modern Major-General.”

As far as cast accolades go I’ve spent a bit of time deciding how to praise each performer. However, on further evaluation, I think it would be best to just praise the entire cast. This is a comedic opera where many of the musical numbers include a majority, or at least a large measure, of the cast. The Pirates of Penzance would simply not work if it did not include such a strong ensemble of voices and energetic actors. Brandon O’Neill might be the bold and sensitive Pirate King, but his kingdom is only as good as the cast that surrounds him. Hunter Ryan Herdlicka, David Pichette, Anne Allgood, Anne Eisendrath, Jared Michael Brown, Greg Stone, Billie Wildrick, Cayman Ilika, Jenny Shotwell and the rest of the vibrant cast create a night of laughs and pure theater enjoyment.

I’m not sure how the economic realities of Broadway work, but if there is room for a Gilbert and Sullivan revival, this is it! As long as Brandon O’Neill is not replaced by Johnny Depp. One last note, I dare anyone to laugh more than my wife and I did during the loud absurdity of “Hush, Hush! Not a Word.” That kind of comedic genius makes The Pirates of Penzance worthy of a second viewing. 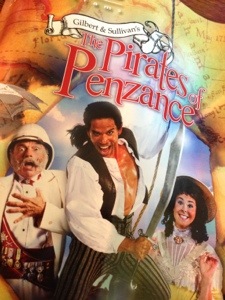 My Work with Starving Children in Guatemala: Please Read!
Many Reasons to Leave the Church: Jesus is Not One of Them!