By on February 15, 2013 in Culture, Review, Uncategorized

Meredith Willson’s The Music Man is so catchy, the Center for Disease Control reports there is still no known cure. After coming into contact with The Music Man, some individuals report difficulty peeing. Primarily because P rhymes with T and T rhymes with P and that stands for pool. This makes little sense to the uninfected. However, for those with a severe case of The Music Man, this is just one of many troubling side effects. Be warned, if you attend The 5th Avenue Theatre’s current production of Meredith Willson’s The Music Man, you may experience one or all of the following complications:

-An inability to drive by a Wells Fargo Bank without breaking into song.
-An increased desire to serenade and woo your local librarian through an elaborately choreographed song and dance.
-When running into old friends, you may have the odd desire to not only talk a little but to pick a little, talk a little, cheep cheep cheep, talk a lot, pick a little more.
-Extreme cases will lead to Shipoopi, followed by quarantine.

I personally caught The Music Man as a child, and I’ve just never been able to quit it. Next to Singing in the Rain, it is my favorite movie musical. With this in mind, I engaged the 5th Avenue Theatre’s production with some rather high expectations and a fair amount of giddy excitement. For the most part, I was not disappointed.

When it comes to the classics, the 5th Avenue shines. Their production of The Music Man is just one more example of how to do classic musical theater right. As I often focus my reviews on the performances, I want to take a moment here to praise the tireless work of those who outfit, frame, and illuminate the performers. The lighting design of Tom Sturge and Christian DeAngelis creates instant warmth as we are transported back and into another world of musical magic. Gregory A. Poplyk’s gorgeous, yet tempered costume design acts as both canvass and character, accentuating each song and dance without distraction. From the hair and makeup design of Mary Pyanowski to the sound design of Ken Travis, it all seems to work with flawless beauty.

I’d like to give special praise to Martin Christoffel’s set design as it struck the right balance between the minimalistic paper-cut framing of the family home to the substantial dance and comedy set of the library. I also enjoyed the homage paid to certain iconic images from the movie. Although a school gymnasium might seem like a less than ideal location for substantial stage time, the production team makes these scenes engaging, inviting, and nostalgic.

Might I add I simply loved the musical’s transitions, particularly the effective use of the aperture curtain and the extended stage walkway over the orchestra pit. Whenever the actors walk out over the pit, it gives the musical a zoom in quality that is, in my opinion, worth even more utilization in future musical productions.

As far as the performers, there is no shortage of talent on display. I’d like to give particular praise to Laura Griffith’s beautiful singing voice accompanied by a strong nuanced portrayal of Marian the librarian. Griffith does an excellent job avoiding the cliche ridden minefield endemic in portraying an “old maid” librarian…..Marian. Jeff Steitzer as the mayor and Laura Kenny as the mayor’s wife give the audience everything they need and more. They are a delight to watch and enjoy. It is always a good sign when the audience is just as enamored with the ancillary stories as with the dominant plot. And I just have to give a shout out to Anne Allgood (Mrs. Paroo) who repeatedly embodies the essence of her last name.

Now to the child actors…I am thoroughly pleased to report that they are more than adequate; they are brilliant. Child acting in musicals is a great challenge as the parts are frequently so stereotypical it is difficult to give a subtle or believable performance. Abi Brittle adeptly performs a rather tricky physical comedy scene that includes a piano as the main prop. She sparkles and glows in her understated role as Amaryllis, a somewhat puppy lovesick pupil.

Then there is Joshua Feinsilber as Winthrop Paroo, otherwise known as the boy with the lisp. Move over Ron Howard, your memory has been replaced. Joshua Feinsilber nails it! He turns a role that could be awe shucks cute, into “wow, that kid knows how to act!” Feinsilber portrays Winthrop as outwardly shy, but with an inner confidence. As he emerges from his trauma induced relational exile, the audience discovers a strong and likable boy. There is a reason he received the biggest applause of the night. He earned it!

Now to the more complicated aspect of this review and the role of Noah Racey as Professor Harold Hill. It is hard for me to be objective about Noah Racey’s performance as my expectations for Harold Hill have been thoroughly imprinted with the voice of Robert Preston. I understand that actors are not hired to impersonate but to interpret the role through their own voice. Even so, I still found myself wanting a more Prestonesque sound to flow from Racey’s lips. It sounded to me that his voice just seemed a bit weaker than the rest of the cast. In some instances, it seemed as if he were holding back his voice as if he were struggling with vocal strain.

Let me be clear that Noah Racey’s vocal performance was still extremely well done. He was in tune and on rhythm. For me, he just couldn’t come out of Robert Preston’s vocal shadows. Regardless of his vocal limitations, Racey chewed up the scenes with his dance and believable acting. His transition from traveling conman to small town family man was believable and aptly navigated. His Marian the Librarian song and dance was, for me, the highlight of the show. Bob Richard and David Alewine’s choreography has Racey jumping from desk to table with complete ease, tapping the help desk bell with the tip of his shoe, while in rhythm. A great performance that once again reminded me of why I love theater at the 5th Avenue. The librarian scene will stay with me for a lifetime.

Simply put, if you want to see an American musical classic, brought to life with the love, care and artistic excellence it deserves, then see Meredith Willson’s The Music Man at the 5th Avenue Theatre. Director Bill Berry has once again made American musical magic. Let the contagion continue. 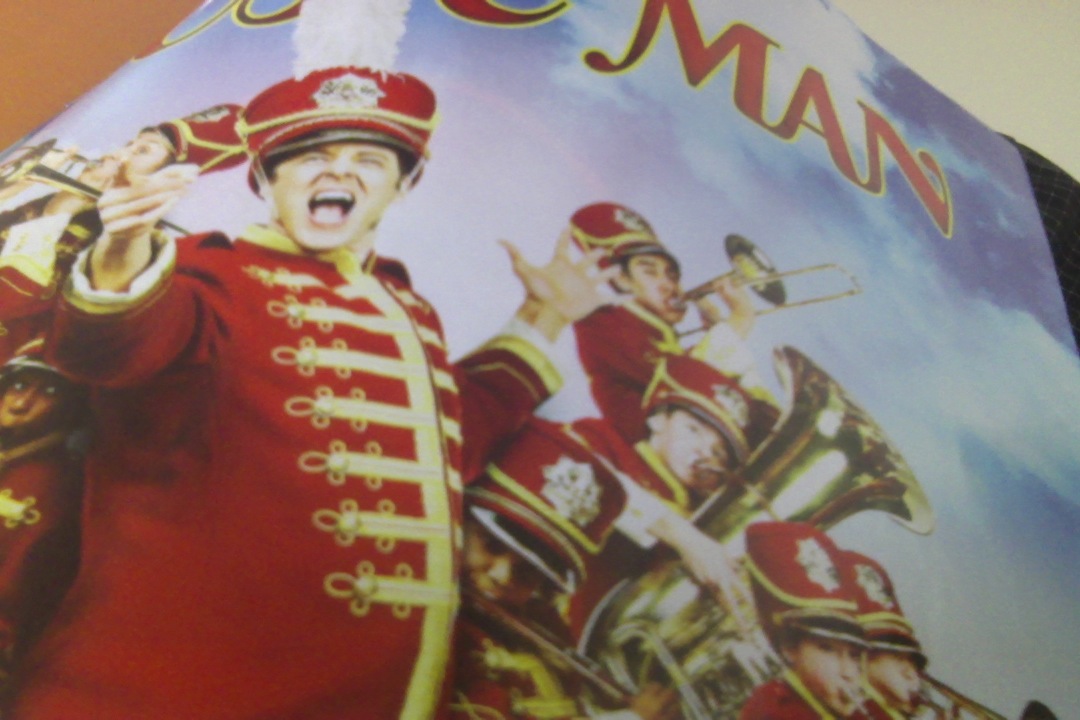