By on October 4, 2012 in Culture, Review, Uncategorized

With the end of The Office and 30Rock on the horizon, I’ve been looking for a couple new shows to DVR in their place. With this in mind, I decided to give the inaugural season of Go On a try. This decision probably had less to do with my volition and more to do with NBC promoting the show between every single Michael Phelps Olympic highlight. My Pavlovian brain just couldn’t resist taking a peek at the latest incarnation of Matthew “Chandler Bing” Perry. Coincidentally, my Homo sapien brain has yet to find need of Animal Practice. Now if it was called Mob Veterinarian I might give it a look-see.

I’ve always enjoyed Matthew Perry’s perpetually sweet yet sarcastic television persona. Of all the men in Friends, he’s the one I could actually imagine wanting as a friend. As far as the women on Friends are concerned, I’m a married man and I have no opinion on the matter whatsoever. I’m a Perry apologist, make that a Matthew Perry apologist who genuinely wants to fully embrace his new comedy vehicle. Unfortunately, in its current state, I am unable to embrace Go On; instead I can only shake hands or politely nod as we pass each other on the DVR.

Even so, I believe there is still hope for the show to find its comedic moorings before sinking into the oblivion of mediocrity. As I’m sure the writers and producers of Go On frequently ponder the question, “What does Doug think about all of this?”, I’ve decided to give my thoughts on why Go On will go off the air if it continues on its current trajectory.

Comedy is a tricky thing. Trying to explain what makes something funny can be one of the most pretentious or boring activities known to humankind (animal kind is indifferent). Even so, I’m going to attempt to express what I believe are the fatal and repeated flaws of Go On. Humor works well when a principle rooted in reality is exaggerated for comedic effect. The exaggeration doesn’t need to be plausible, but the premise of the exaggeration usually needs to be rooted in the realm of believability. In other word, the comedic exaggeration is only funny if the premise is believable. A classic example of this truth would be watching Lucy, from I Love Lucy, try to frantically keep up with an ever increasing candy factory assembly line. Everyone is able to relate with the concept of a job or assembly line that is moving faster than our ability to cope. Lucille Ball begins with this relatable scenario and moves it towards absurd hilarity. It’s funny because the humor is rooted in exaggerated truth. No matter how extreme the exaggeration, there usually needs to be some sort of plausible premise.

Go On frequently misses the concept by starting with an implausible situation and simply making it even more implausible. Matthew Perry’s sports radio talk show host character Ryan King repeatedly engages in behavior that has no believability. For instance, in the latest episode, Ryan King decides he needs to learn how to shop and cook in the absence of his recently departed wife. In the next scene, we find him engaged in a thoroughly unbelievable situation. He is so inept at shopping that he is unable to determine how much milk he should buy to fix cereal. Suddenly, our supposed edgy sport talk jock is unable to do something most 9 year olds have already mastered. In this supposed humorous scene, Ryan King follows a stranger through the grocery store copying his every selection and purchase. The script leaves Matthew Perry to portray a man who has never purchased a single grocery item in his life. The scene starts from such a ridiculous place of stupidity, it simply feels contrived and absurd. When Matthew Perry turns into a complete idiot, it is difficult to identify with him as a protagonist. At some level a strong comedic show must create situations that help the audience identify with their characters.

Another one of Go On’s weaknesses is the strange and awkward dynamic of the show’s grief therapy group. Go On is supposedly looking at the interesting stories that rise up when a high powered, somewhat egotistical talk radio host interacts with a community grief support group. That might be a good set up for a comedy if Matthew Perry’s character actually interacted with a grief support group. In reality, Go On’s grief group looks more like a neurotic counseling circle from The Bob Newhart Show. Unless only really unstable, mentally challenged, psychologically disturbed, overt stereotypes seek help with their grief. The only believable characters within the grief group are Matthew Perry and Ann the lesbian lawyer played by Julie White. It is difficult to believe that either of them would spend actually more than an hour in that group, let alone bowl together, or take tests together, or drive together, or do any number of things they seem to regularly do together for no apparent logical reason.

There have certainly been irrational group gathering dynamics in television comedies. Friends spent a lot of time on the couch and in each other’s apartments. But at least one could plausibly believe they would occasionally engage in such activity. The fact that Go On’s group of seemingly mentally challenged misfits regularly hang out at any level is just not believable. Group counseling, maybe……voluntary community grief group……nunca! Don’t even get me started on the carefully drawn three dimensional spanglish speaking character known as Fausta. She seems to be based on the sister of Fawlty Towers’ bell hop Manuel.

Because one cannot truly believe that this group would actually gather together on a regular basis, it is difficult to feel much for their conflicts or their heartfelt resolutions. Which brings me to the final critique of Go On. Trying to do comedy out of death or tragedy is not easy. Starting a new show around the protagonist losing his wife is a somewhat tricky situation. Particularly as Matthew Perry’s character is portrayed as someone who genuinely loved his wife. A love relationship like this cannot be treated with Seinfeld indifference or Terms of Endearment sincerity. Ultimately, there is only so much considering of death, dying, and existence one can take when watching a half hour comedy. Even so, it seems that Go On often misses the real emotional punch of the world they’ve created. For fear of touching real emotions, the show just dabbles into Chicken Soup for the Soul platitudes. Matthew Perry’s character is portrayed as out of touch with his true feelings. However, even when he discovers his true feelings, they still seem rather shallow and out of touch.

Go On’s inability to create believable characters in plausible situations with real human emotions leaves the show in the sphere of mediocrity. It sometimes makes you laugh, sometimes makes you connect, and sometimes makes you feel; but not too much and not enough to make it a consistently enjoyable show. If Go On is to continue in my DVR, it is going to need to go a little deeper in its development. 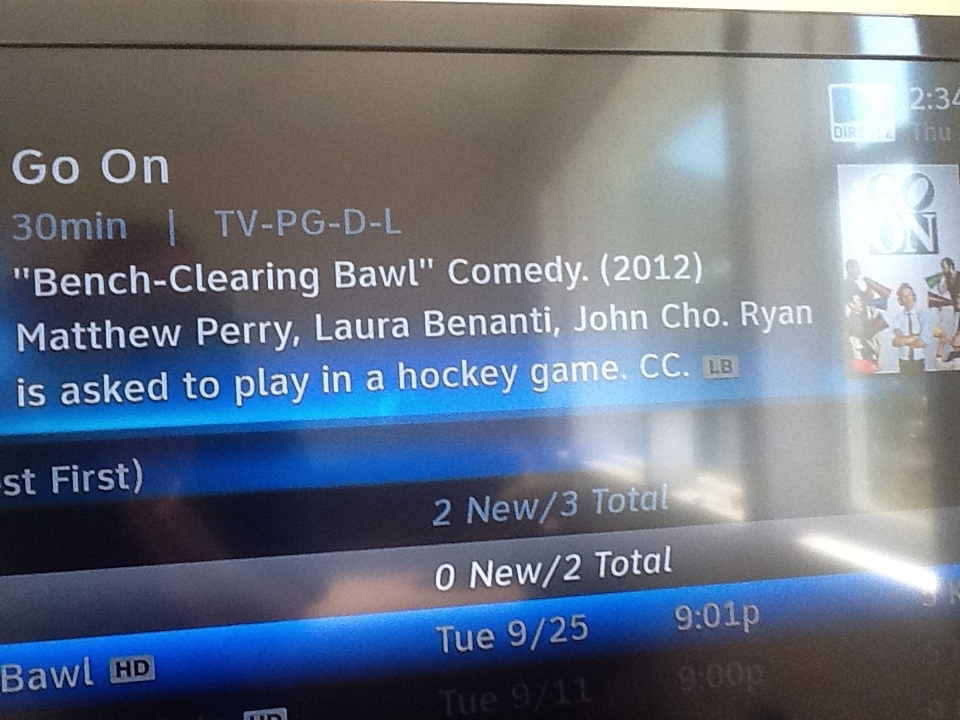