The Pitman Painters by Lee Hall is inspired by William Feaver’s book concerning the Ashington group. In 1934, a small group of working class men gathered at the Ashington, England YMCA hall to be taught art appreciation by Robert Lyon from Durham University. The class was sponsored by the union run Worker’s Education Association (WEA) and was comprised mostly of miners. The Pitman Painters tells the story of how an art appreciation class turned a group of hard working laborers into well known artists. It’s also the story of the perpetual struggle between individuality and community, expression and conformity, artistic purity and financial necessity. The Pitmen Painters follows this struggle through the eyes of five students within the backdrop of economic depression, war, and political unrest. It is a play that succeeds in its ability to educate, inspire, and entertain.

Like many art forms, The Pitman Painters’ weaknesses seem to reside in the disconnect between the creator’s intentions and the patron’s reception. For me, I was far more able to connect with the personal struggles and triumphs of the painters than I was able to appreciate or even comprehend how their struggles fit into the larger historical issue of the labor movement in England. Which for the most part was not a problem, as the play’s central core and strength abides in its personal portrayal of a community of painters discovering a larger world of artistic expression and appreciation. Although their struggle is positioned on the same canvass of world and national upheaval, the play gives far more life to the humanity of the individuals than to the ideologies of the age in which they labored.

The transcendent nature of the miners’ struggles is what makes The Pitman Painters most satisfying and approachable as a play. It is this conviction that made it difficult for me to fully appreciate The Pitman Painters’ resolution. While the author seemed to desire a conclusion that pointed to a larger political or economic theme, I was left wanting a more personal resolution. As the play is biographical, this resolution may not have been possible.

Regardless of this minor frustration, I found The Pitman Painters to be very enjoyable on various levels. First and foremost, the play is funny. The ACT Theatre ensemble cast clearly understands and appreciates the comedic pacing and timing of Lee Hall’s humorous dialogue. Joseph P. McCarthy, as Jimmy Floyd, excels in expressing naiveté, sincerity, and many of the best laughs of the show. He also does a masterful job of delivering the most poignant and surprising soliloquy of the night. Although he delivers some of the broadest humor, he refuses to play the simpleton. Rather, he is an embodiment of the paintings his character has created: simple but worthy.

Charles Leggett, as George Brown, does the masterful job of making a legalistic, administrative task master likable. He acts as the pseudo dean of the WEA education program, perpetually reminding all participants that there are rules to be followed. His need to enforce these rules leads to many instances of enjoyable word play. Again, Leggett’s character could have easily become a stereotype in the hands of a less skilled actor.

As this is truly an ensemble cast, it seems appropriate to make at least some mention of each cast member’s contribution. R. Hamilton Wright has the meaty role of a somewhat conflicted socialist dental mechanic. On one hand, he is perpetually lamenting the oppressive conditions of an unjust social system. On the other hand, he is frequently encouraging his fellow miners to pursue a path that seems to contradict his ideology. This is less an issue of contradictions as it is priorities. Wright understands that his character is primarily motivated by a genuine love for the individuals entrusted to his care. Whether paying for a fellow class member’s tuition, or encouraging an exceptional student to pursue financial freedom, Wright imbues his character with fatherly compassion.

Daniel Brockley’s Young Lad role is probably the least defined character of the play. Brockley does the most he can with a role that is somewhat nebulous and ancillary. It appears that his character is included more as a way of helping the audience understand the larger historical context of the Ashington group. Regardless, Brockley does his best to integrate his character into the story. This includes a wonderfully fiery take on Picasso. Brockley is rewarded for his mostly tempered role by also playing the eccentric cameo of painter Ben Nicholson.

If there is a lead in The Pitman Painters, it belongs to Jason Marr as Oliver Kilbourn. As Oliver discovers a new world of artistic expression, we discover him. At first he is a mystery, an undefined laborer. He starts the play as simply a miner on the stage, a representation of the stereotype. He works hard and has a tough life. Even so, he is not to be pitied. In fact, he is not looking for us to understand him, he is simply living and existing within the context of the community that defines his existence.

However, as the play progresses, we see the power of discovery. As Oliver paints, learns, and grows, we see a personality forming before our eyes. No longer is he a symbol of the working class. Instead, he is an individual with conflicting convictions, desires, and aspirations. Jason Marr powerfully brings us into this complex everyday man. In some ways he is every man, in other ways he is no man but himself. As I gazed upon Marr’s understated, but powerful portrayal, I felt as if he was truly drawing from the complexity of existing as an actor. As if he was tapping into the perpetual struggle of pursuing one’s dream, while still contending for an identity no one can defile. The struggle of his character is the heart of the play. It is what makes the journey most satisfying.

The role of the teacher Robert Lyon is tackled by Frank Lawler. Lawler has a glow when educating his pupils that bubbles with excitement, energy, and conviction. However, he also allows the insecurities, arrogance, and indifferences of his character to shine through. He does an excellent job of conveying the economy of his arrangement. Although he has noble ideas to help the working class, he is also using his experience to further his career aspirations. Consequently, he vacillates between helpful teacher and mild opportunist. His dual purposes are less judged than simply noted. I found his role as educator particularly enlightening. It was a pleasant surprise to attend a play that also served as an introduction to art theory. If it wasn’t for the temporary nudity, I’d recommend this play as a high school art class field trip.

Morgan Rowe rounds out the ensemble leads portraying the wealthy patron and benefactor of the arts, Helen Sutherland. Rowe also succeeds in avoiding the stereotypical entrapments of her role. Her character is clearly a representation of the opportunities and challenges that face “successful” artists. As enthusiast and consumer, she provides an outlet for the painters’ artistic expression. As a member of the elite, she represents the cost of artistic financial freedom. To escape poverty, the artist must, at some level, provide content that is valued by the benefactor. In creating art for the benefactor’s consumption, the artists might possibly compromise their integrity or grow in the depth and breadth of their expression. Rowe is effective in her ability to show both the connection and disconnect with the artists that is evident in her position.

Since I have mentioned all the cast but one, it also seems fitting to recognize Christine Marie Brown’s limited role as the studio model Susan Parks. Her comedic main scene leads to some of the biggest laughs of the night. I thought a lot about whether or not I’d address the very, very brief nudity. Although this might be my puritanical nature, I believe the tease was far more effective than the unnecessary payoff. I thought I’d give my two cents in that it will most likely just increase ticket sales.

Seattle is a wonderful theater town and the ACT theater’s presentation of The Pitmen Painters is another example of the amazing work that can be discovered on a nightly basis. If I could point to a trend or feel that is synonymous with the Seattle theater scene, I would point to the phrase “confident but understated.” Director Kurt Beattie demonstrates this virtue. He clearly has a confidence in the material and the ability of his actors to communicate the story. Consequently, the staging and set design are geared towards highlighting the artists and the art. If the play is to succeed or fail, it will be based on the power of the script and the expertise of the cast and crew.

The Pitmen Painters is an education in art history and the history of the Ashington group painters. It’s also an exercise in examining the struggle of pursuing individual fulfillment while honoring community identity. Where the script lacks a satisfying payoff, it more than overcomes in providing a worthwhile journey. Or at least that is how I experienced this artistic endeavor. As with all artistic expression, the meaning lies somewhere between the creator’s intentions and the patrons’ reception. 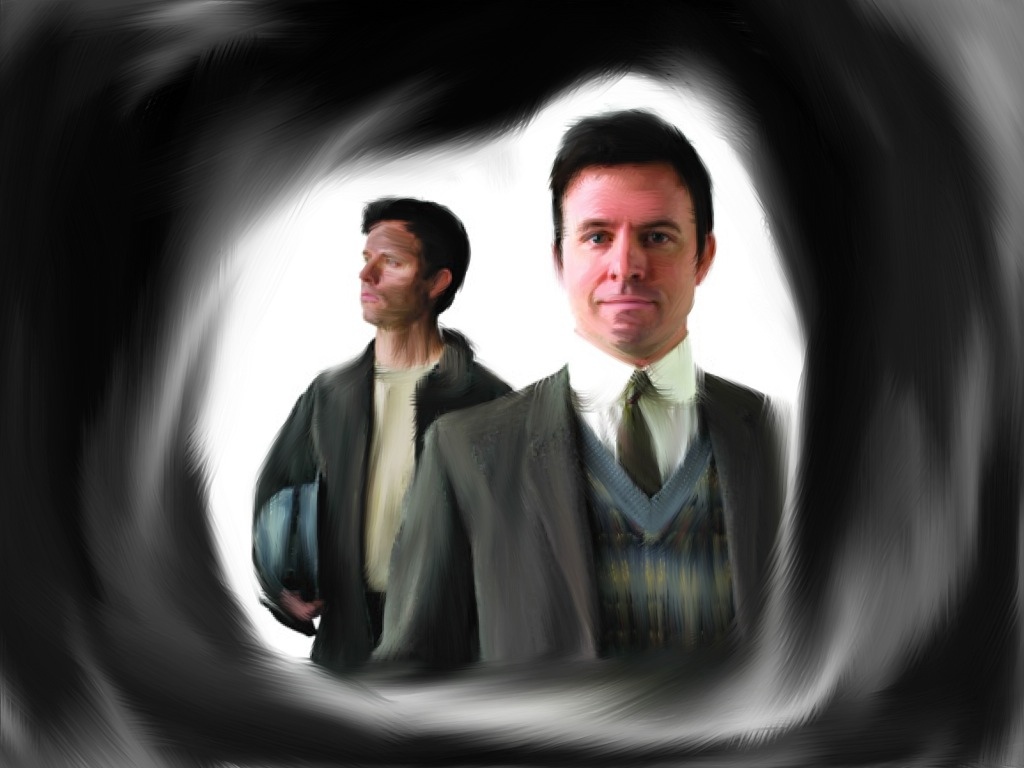