My wife and I finally found enough free time to see the new musical First Date, a co-production of ACT-A Contemporary Theatre and The 5th Avenue Theatre. As we settled into our seats and perused the program, my wife whispered, “I wonder if anyone on a first date is seeing this show? That sounds like something you would have done.” I whispered back, “Well, if anyone is, it’ll either be a great story to tell their kids someday or a really terrible idea.”

About an hour and half later, as my wife and I walked to the parking garage smiling and recalling our enjoyment of the show, I took comfort in knowing that for the hopelessly romantic, the musical First Date would most assuredly be a wonderful first outing.

The title is the premise of First Date, where two strangers try to make a love connection while navigating the complexities of blind date etiquette and expectations. Aaron, played by Eric Ankrim, is an overly nervous, awkwardly sincere, nice guy with relational baggage. Casey, played by Kelly Karbacz is an outwardly jaded, inwardly guarded, bad girl with relational baggage.

This classic opposites both attract and repel each other set up makes for some very funny interactions. However, as the musical progresses, we begin to see that these first date personas are more complicated or even more tormented below the surface.

To embody the couple’s inner turmoil, the audience is introduced to the inner conscience or subconscious struggles of each dater. This is where the powerful comedic supporting cast of Richard Gray, Benjamin Harris, Vicki Noon, Brandon O’Neill, and Billie Wildrick spend the night personifying inner arguments as well as past loves, regrets, and counseling sessions.

All right, before I begin to turn this show into Freud the Musical, I need to point out that first and foremost First Date is a funny musical. In both word and deed there are many laughs and several crowd pleasing songs. I particularly enjoyed “The World Wide Web is Forever.” In this show stopper (yeah, I know that’s a cliché but I’m gonna use it) Google, Facebook, Youtube, Twitter and Ebay sing and dance around the stage celebrating the fact that they will forever control all blind date first impressions.

As someone who dated before the social networking onslaught, I was both humored and educated by this social network number. I was also grateful that my dating days predate the smart phone. Speaking of phones, my biggest complaint of the night is the perpetual use of a ring tone as a plot device. At least three times in the show a familiar ringtone echoed through the theater, sending half of the audience into immediate visceral panic. Although I have a different ringtone than the one used by the production, I still was unable to shut down my fight or flight response to hearing the ring. Every time the phone rang, I moved my hand towards my pocket to shut off my already silenced device. Every single time! This seems like a Pavlovian trick by director Bill Berry to tap into the audience’s emotional core. Going from laughter to split second possible embarrassment terror, back to relief and calm, is a sure way to make the night memorable.

Memorable is an excellent way to describe First Date. Austin Winsberg has written a book that balances universal themes with nuanced surprises. Consequently, the musical feels familiar yet refreshing. Alan Zachary and Michael Weiner have written music and lyrics that are first and foremost humorous, but also incredibly sweet.

One cannot help but notice the optimistic, romantic overtones that permeate the entire production. Although the dialogue would clearly merit an R rating by the MPAA, First Date is not in the least bit cynical. Rather, it is built on the classic American musical foundation of romantic optimism. The belief that there is someone out there who will truly understand and love me for who I am. The belief that regardless of my past heartache or my present angst, there is, in fact, the possibility of a better tomorrow. To be honest, I’m a sucker for any show which makes room for the possibility of true love.

Although some might accuse a production like First Date to be escapist entertainment, I prefer to see the show as an effort to contrast the spectator, cynical age that permeates so much of our culture. Instead of two hours of angst, First Date makes room for the possibility of love.

The Seattle theater scene has such an amazing array of talent and creative expression. As I listened to Eric Ankrim and Billie Wildrick sing their heartbreaking “The Things I Never Said” duet, I was once again reminded of the power of live theater. Ankrim’s voice was clear, smooth toned, and fragile, the lyrics cut beyond temporal issues of dating into larger conceptions of love and family. It was a beautiful, unexpected, shared moment. One of those moments that makes the entire night worthwhile.

As my wife and I drove home from “a night of theater” I was reminded of what I loved about her on my first date and what I love about her even more today. Any musical that can stir up such remembrances is worth my praise. First Date, a musical to fall in love with again. 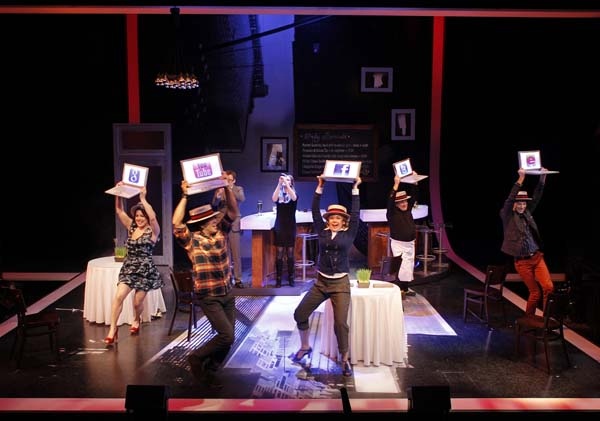 How to Enter the Promised Land: Deuteronomy 6:16-19
Why I attend gatherings that don’t always meet my needs.