By on March 29, 2012 in Culture, Faith, Guest Blog, Religion, Uncategorized

Jon Foreman of Switchfoot gave me permission to repost this blog. . . or at least his publicist said he gave me permission. Either way, thought I’d share this thought provoking post on being possessed by truth.

Possessed By Truth
By Jon Foreman of Switchfoot
www.Jonforeman.com
www.Switchfoot.com

I am in seat 23 E on a flight from San Diego to Dallas. It’s a middle seat. I’m trying to remain composed and tranquil; I am failing. As far as I can tell the baby behind me feels about the same way I do. I thumb through the airline magazine (my regular watering hole for current events), until I start to wonder what viscous substance stuck the pages of the magazine together in the first place. I put the magazine back, stretch into the seat, and rub a sore neck.

Out of nowhere, I am struck by a thought. A thought that has boundless implications. A thought that feels more important than the seat belt/life-vest exhibition. So I write the idea on the back of my hand:

I look at the words now scrawled on the back of my hand. I think it over and look away. The clouds are turning colors, blue, grey, green, purple. The sun is setting off somewhere behind me. It’s my favorite time of day. I look back at my hand and read the idea again.

“Maybe truth is something which possesses me.”

To be possessed by truth rather than the other way round is a thought that goes against much of what I have been taught. In fact, most of my education has been presented as a growing accumulation of truth. Throughout public school, I was graded on my comprehension of the facts. The higher grades were awarded to those who really owned the material.

The idea that truth has no owner turns the whole arrangement on its head. Maybe the straight-A students were the ones who surrendered to the system. Maybe they became servants and allowed the information to become their master, devoting countless hours of study to prove their devotion. Perhaps I was too devoted to other things in high school; I was possessed by the Pacific, going surfing whenever I could. I would never say that I owned the ocean, but I would certainly say that the ocean owned me. I surrendered to its call and resisted the truth that high school had to offer.

We now have more information than thousands of years of humanity could ever dream of. Without any effort at all, we could know the weather anywhere around the world, the population of Taiwan, or the first lady’s middle name (I’m going to look it up as soon as I get off the flight). With this sort of data at our fingertips, we truly possess more facts than past civilizations would ever hope for. And yet, the meaning of it all is just as elusive as ever. I’m still sitting on a plane unsure as to whether the middle seat is occupying me or the other way round.

The idea spins around in my head — so I look to folks that are smarter than me. I turn my thoughts to Sir Isaac Newton and the physical law most commonly associated with his name: gravity. The basic idea of gravitational pull is simple to understand — a clumsy step on the stairs could prove Newton right. And yet this awkward fall does not prove that I am now the proud owner of gravity. No, quite the opposite. I might have a bruise or worse to call my own, but gravity certainly possesses me. I am under the dominion of the truth of gravity whether I fully understand the law or not.

I look out at the fading hills and imagine someone driving home from work. He’s going bald quicker than he thinks. He just bought himself a car that screams one thing: MiddleAgeCrisisSportsCar. He begins the drive he takes home from work everyday. The traffic lights, the cars around him, the flat tire…these are all facts that he encounters on the way home; this is the data that he is responding to. He is under the influence of the facts around him. It’s not determinism; free will is still involved. And yet, rarely will he choose to ignore a red light or slam into the car next to him. He does not possess the facts, the facts possess him and he drives accordingly.

Our market economy is fueled by ownership. The water we drink, the land that we live on, even our ideas are referred to as intellectual property as our world becomes homogenized into merchandise. These products are to be bought or sold — anyone’s private possession for the right price. But from time to time we ask the question: Who owns who? Is the MiddleAgeCrisisSportsCar the possession of a man who’s losing his hair? Or is our balding friend possessed by his MiddleAgeCrisisSportsCar? Does he give the car her identity, or does the MiddleAgeCrisisSportsCar with her sleek lines and bright red paint lend the gentleman her personality for a brief moment of remembered youth?

Yes, our possessions possess us far more than we’d like to admit. And yet, even in our capitalist culture, we don’t think of our friends or family this way. Outside of the greek life at college, most relationships have nothing to do with money changing hands. Yes, you may possess friends, but you would never call these friends your possession. When we fall in love we fall under the spell of another. You might say that your buddy is whipped, “He is possessed. She owns him.” The truth of the one you love is most certainly something that possesses you and not the other way round.

I come up for air as the lady next to me, in 23 F is rubbing the perfume from the magazine onto her wrists. Smelling her wrists. Then repeating. She is trying to keep the fragrance with her, to possess the essence of the advertisement. I feel a sneeze coming on. Yes. Here it comes. For a brief moment there, I possessed a sneeze. No, actually I think the sneeze possessed me.

The stewardess hands me my orange juice. She sees the writing on the back of my hand and throws me a Sarah Palin comment. Dang it. Chris Martin disclaimers were hard enough. I explain that I’ve been writing things on my hands for a long time. There, good. At least we have an understanding. Now she has the truth. I look back at my hand, even writing this particular truth down on the back of my hand is a reason to think: Do I now have possession of this truth, owning its understanding or am I now temporarily tattooed with this truth, subservient to its reality?

My thoughts drift to religion. These are the truths that people live by and hold dear. In many ways, these are the truths that inspire our best and worst moments. The truths that motivate Mother Theresa and start religious wars. How can this be? How can fresh water and salt water come from the same hose? Perhaps it has to do with this concept of possession. If I view the truth as my possession to keep safe, I might feel the need to protect my faith. But if I am possessed by the truth, perhaps this protection is no longer needed. Maybe I am set free from the need to defend the truth, rather the truth defends me.

The idea of defending an all-powerful deity feels a bit silly when it’s put out in the wind like that. And yet, that sentiment seems to epitomize much of what religion has come to mean. After centuries of witch-hunts, inquisitions and holy wars, many are still fighting hard to defend their faith in an omnipotent God who has no need of our protection. Maybe we are still protecting our beliefs as though we were the owners of this truth.

If our faith is to be more than just a lit match in the powder-keg of differing beliefs, what role does religion play in our modern world? What would it mean to be possessed by truth rather than simply the proud owner of a particular denomination? Maybe we could start with the common ground that we all can call truth. In all of the major religions of the world I find the call to protect the less fortunate.

From the Torah:
“Learn to do right! Seek justice, encourage the oppressed. Defend the cause of the fatherless, plead the case of the widow.”
Isaiah 1:17

From the Koran:
“Spend of your substance, out of love for Him, for your kin, for orphans, for the needy, for the wayfarer, for those who ask, for the ransom of slaves, to be steadfast in prayer and to practice regular charity.”
83. Section 10

From the New Testament:
“Pure and genuine religion in the sight of God the Father means caring for orphans and widows in their distress and refusing to let the world corrupt you.”
James 1:27

From Buddha:
“A generous heart, kind speech, and a life of service and compassion are the things which renew humanity.”

The “truth” of loving those around me, the “truth” of seeking justice for the oppressed, the “truth” of a life of service — these are truths to be possessed by: to be a slave in the service of the kingdom of the heavens, to be the servant of all. If the truths in this life have no owner then we are set free: free from the need to defend the truth, free to be possessed by this truth and simply live it out. Truth becomes much too large for me to possess; truth is the beauty and authenticity which possesses me.

Maybe the meaning of life is not something that I can control, but rather a reality which possesses me. Maybe there is no life guiding “fact” that I can put in my back pocket, as though I were the sole owner of the universe. Perhaps The-Meaning-of-Life-Himself is asking me the questions. When I look at a sunset, when I hear the songs of the ocean gulls, when I feel the warmth of family and friends, I am reminded of a story that is bigger than I am. Yes, this is my story but not mine alone. Truth was never mine alone. Truth is that which possesses me.

Oh and for the record, it’s Michelle LaVaughn Obama. But I think that I might have already known that… 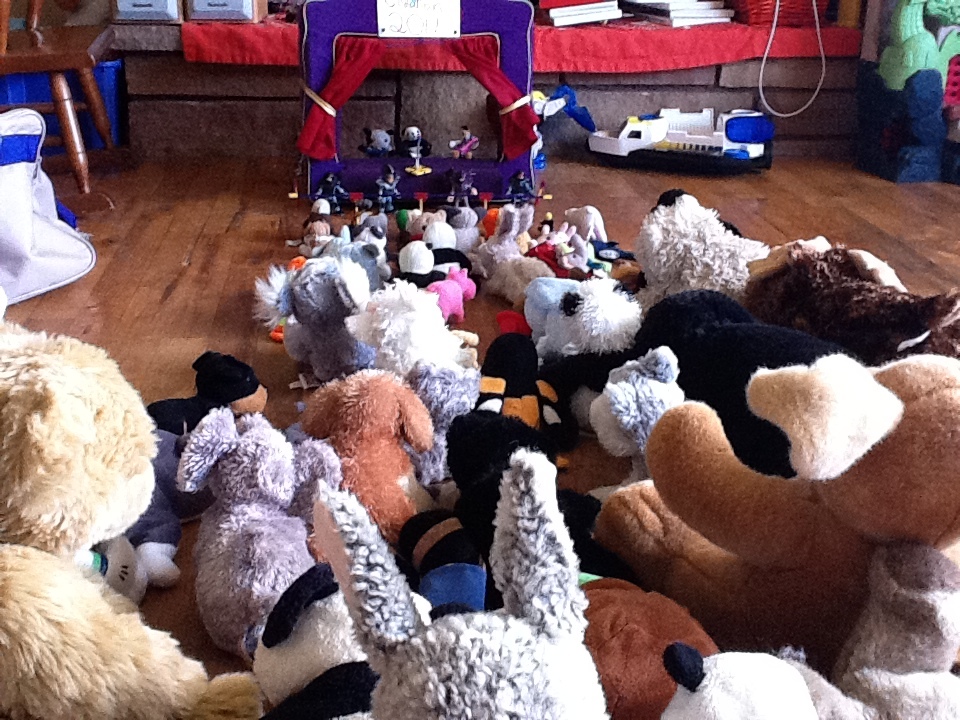 Spiritual Prosperity is Rooted in Giving God Our First and Best Fruit!
Meditations on coming out of slavery into freedom (Exodus 4 and 5)