By on March 12, 2012 in Guest Blog, Spiritual Formation, Uncategorized

(Today’s Guest Blog is From Ron Almberg Jr. At Weatherstone’s Blog. Ron Almberg is a former pastor of 25 years who now works in real estate to support his ministry of writing, speaking and mission efforts to unreached people groups. His blog can be found at http://weatherstone61.wordpress.com/)

What is it within the human psyche that pulls at us to compare ourselves to others? When did the human race develop the idea that any one of us is capable of summarily judging another person’s existential journey by examining their state of being at any one given moment along life’s time line? After all, does any one of us know our own beginning from the end, let alone any other’s?

Yet, almost every day there is not one individual of the human race who does not at some point put their self in the judge’s seat to declare judgment for or against someone else or a whole class of someones. I know I am guilty of this ridiculous attempt at playing celestial critic. I have often admitted to others over the past several years that “I can’t pick’ em.” I have, in the past, attempted to evaluate the potential of individuals and thereby also prognosticate their outcome. I have failed more often times than not.

Individuals whom I considered the most brilliant, talented, gifted and spiritual, and so warranted my own time and energies, have turned out to be some of my biggest disappointments to date. They are far from where I thought they would be in terms of accomplishment and far from God. On the other hand, individuals whom I considered to be questionable, or even not worth too much effort on my part because I foresaw only failure in their future, have turned out to be some of the biggest surprises. To this date, some of them are successful and give great glory to God.

And the jury of time is still out. Who knows but that the roles may be reversed again in the future before the end comes to each of their stories. One thing I do know: I don’t know. I do not know how their stories will turn out. All I have is this snap-shot moment in time of where they are on their journey and how they are doing. The same holds true for my own journey.

This is possibly the spiritual angst the Apostle Paul had in mind when he warned himself, “I give blows to my body, and keep it under control, for fear that, after having given the good news to others, I myself might not have God’s approval” (1 Cor. (9:27, BBE). Even as spiritual leader the Apostle Paul knew the challenges of life’s journey. He told the believers in Philippi, “It’s not that I’ve already reached the goal or have already completed the course. But I run to win that which Jesus Christ has already won for me” (Phil. 3:12, GW).

When I was a teenager, I worked for a time in the apple orchards around Oroville, Washington and Tonasket, Washington. The orchard job was an early summer one. I was hired along with others to go through the apple trees and thin the crops. The goal was to evenly distribute the fruit along the branches. At the same time, diseased or badly misshapen fruit was weeded out. This resulted in bigger and more beautiful fruit for the market in the fall harvest.

To be really good, one had to make quick decision and act quickly. The job did not allow for one to take the time to sit back and study a tree and its individual branches or individual apples. Each apple or group of apples could not be meticulously weighed, examined and judged. Decisions were made in the moment and on-the-fly. Sometimes a bad apple or two was missed. At other times, too many good ones were cast aside to rot on the ground.

Glacial Water Falls, September 2010 ©Weatherstone/Ron Almberg, Jr. (2010)
Inspecting the fruit from a human life is not as easy. It cannot be done as cavalier and casually. There are far greater consequences. As much as we like to spout the modern proverb, “You can’t judge a book by the cover,” we still regularly attempt it. I know that I missed some really good stories because I did so. I should have more closely followed the wisdom given to the prophet Isaiah: “Do away with the pointing finger and malicious talk!” (58:9).

The problem in today’s religious environment is that many of Jesus’ followers like to think of themselves as spiritual fruit inspectors. Some, I presume, think they may have been given the spiritual gift or authority of fruit inspection. However, this seems to be a position that Jesus has reserved solely for himself. Dare we attempt to take his seat or position in the heavenly courtroom?

After telling the crowd gathered around him The Parable of the Sower and the Soils, Jesus launched into another story: The Parable of the Wheat and the Tares (Matt. 13:24 – 30). It seems that a farmer took the time to sow good wheat seed in his fields looking forward to a good harvest. However, his enemy, who obviously hated the farmer’s success, took a night to sow weeds into the farmer’s field. It soon became apparent to the farmer and his workers that weeds were growing in his wheat fields. What do you propose they do?

The farmhands reacted like so many of us today – myself included: “Pull them out by their roots! Get rid of them! Burn them!“ However, the wise farmer saw the danger in this approach. The good wheat would be uprooted too. Then the whole crop would be damaged. Rather than risking the good wheat, in the farmer’s wisdom, he told his farmhands to “Leave the weeds alone until harvest time. Then I’ll tell my workers to gather the weeds and tie them up and burn them. But I’ll have them store the wheat in my barn” (v. 30).

Apparently, while many of us at any one moment might be able to identify good or bad fruit (“A good tree produces good fruit, and a bad tree produces bad fruit” (Matt. 7:17), the Master reserves only for himself the duty of proclaiming judgment – good or bad. And this he leaves to accomplish at the end of all things. So much for instant gratification in our justice system.

So, I have given up fruit inspection in the lives of others. I figure I am doing well if I can examine the products of my own life. Like the Apostle Paul, I will be doing well if I can keep my own life trimmed and pruned so that what it produces will be good. I know I am carrying a few bad apples. I just may need someone’s help to reach them to improve my potential harvest. If I can do that, it will be enough fruit inspection for me. 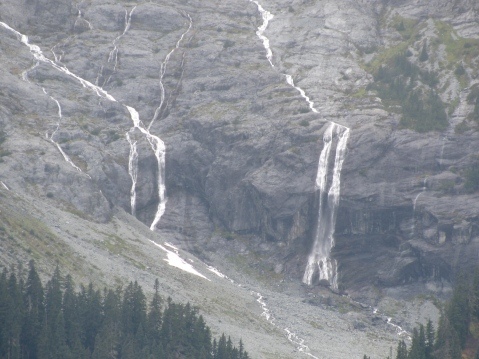 Precious stone or kicking stone?
The Primary Motivation for My Life